Well, as anyone who has had a near-cross stitch experience can tell you, it was quite a harrowing ordeal.  My future blogging life flashed before my eyes with such titles as "Maybe going to finish TWO projects this year" and "I gained another inch today."  I would have to start handing out "I.O.U." cards instead of gifts....er, that is, more often than I do now.  If THAT isn't enough to set a knitter quivering down to the very bottom of her WIP pile, I don't know what is.

Taking a page from the vaccination idea, tonight I dug out this 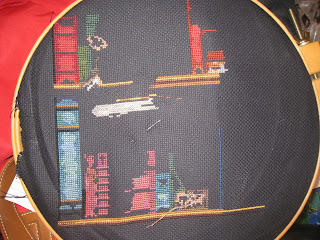 and worked on it for 20 minutes.  I think this is an "after" picture, though it hardly matters.  I'm not doing the best job in the world on this as I've gone all sorts of directions & the threads are crossing every which way, but I'm 40 now, and by the time I finish this sucker no one I know will have the eye sight to notice its flaws.

Just in case this was not a thorough enough inoculation against an even-slower-than-knitting hobby, I have a reminder to do at least one thread's worth of work on this thing per month, which sounds like a really slow pace but is actually light years faster than what has been happening now.  I started this thing to go in the office of my old house, and since I sold the just under 5 years ago, I'm guessing I started this thing in 2004 or early 2005.  I figure at the new rate I'll have it done in time to hang on the walls of the retirement center Andy and I move to in 40 years.

And craft gods willing, I won't ever buy a SECOND one to start......