And here it is, almost the end of August.  Whoops. But there has been some crafting!  On the successful crafting front, this: 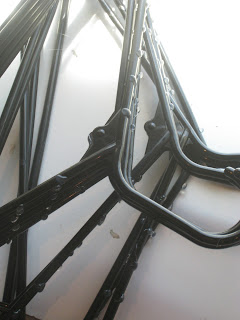 might be one of the few Pinterest projects which actually works.  You know how clothes slide off those plastic hangers?  Well, little drops of hot glue on them actually stops things from sliding off, and they don't attract lint like the velvet ones. 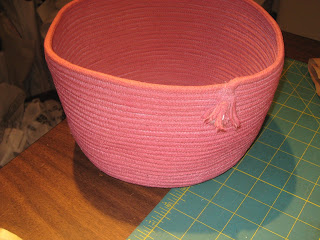 is my attempt at an ombre-shading dyed rope bowl.  I'm going to guess type of dye used is the key element that was left out of the instructions.  So I have a solid pink bowl.

I also got the Begonia shawl finished for my friend's birthday, 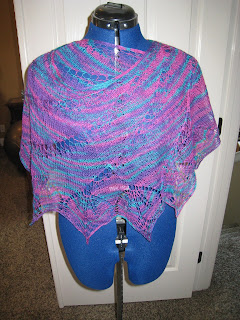 and only 6-weeks late.  Look at MY speed.  And since I was blocking, 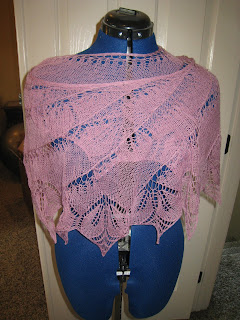 I blocked mine as well--only 4 months after finishing the knitting.  I'd blame it on work (which is taking up an absurd amount of time), but I think we all know my general ability to procrastinate finishing steps needs no additional help, am I right?

I'm trying to keep more and more projects in bags with details and to prevent fading, so I keep a plastic bag of plastic bags in the sewing room, which Calisto has recently located: 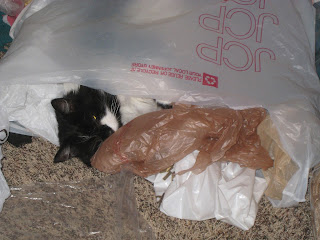 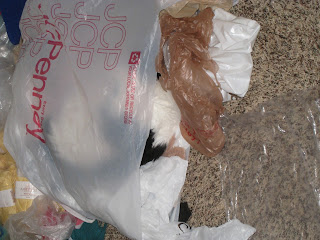 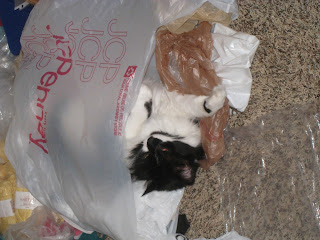 Did I ever mention that plastic bags are her favorite thing EVER?  She spent the entire day in there, meowing for attention every once in a while.  It was pretty cute until she hacked up a hairball in the sewing room.  Theo remains preferred Sewing Kitty.

Hope you're all having a lovely last month of summer!