It's 3:00 PM here and so far, no one has needed to go to any sort of doctor or vet--we're making progress!  We're not great, of course, 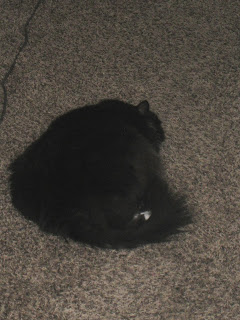 and I don't think I've been forgiven for yesterday's trip to the vet just yet, but after being pulverized by the physical therapist yesterday, I felt good enough this morning to go for a walk around our subdivision today.  Not a long one, but I think I could have.  Because of all the issues in the last few weeks, it's more important than ever that I don't hurt myself because it just winds everything back up and undoes all the progress I've made the last 4 months.  So I'm trying very, very, VERY hard to do nothing to upset my back, so a small walk that I can do is 1000-times better than a longer walk that I can't do.

Of course, yesterday after physical therapy I wasn't feeling nearly as good, so I've had a bit of a crafting marathon.  Being so close to my ornament goal, I decided to dig out 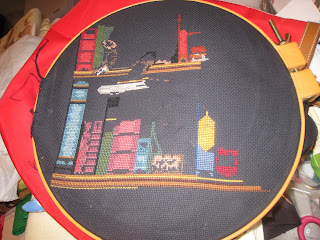 the cross stitch!  It got one entire thread of brown yesterday.  That may be all it gets this year, but at least it made some progress.  Today it was back to 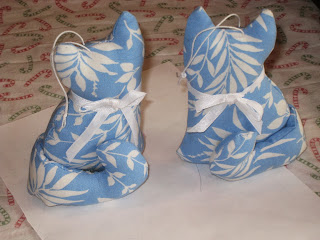 ornaments!  The cat on the right is a back-of-the-tree ornament as I initially put his tail on backwards.  I did get it removed, 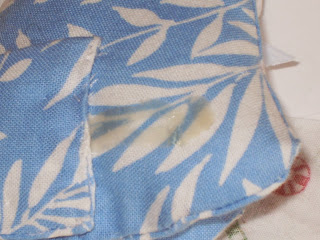 but as I had used the hot glue gun to hold it in place, he has a glue tattoo on his butt.  Maybe I'll hang him low enough for the cats to play with.  Calisto currently has a shaved backside, and might appreciate the camaraderie..... 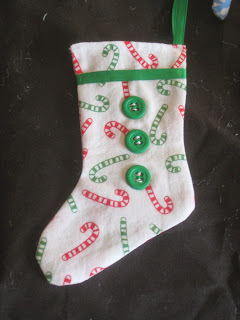 which is okay--just nothing special.  Still, at least nothing is going the wrong direction, and it brings me to 343 ornaments for the year so far!  I am actually going to make my goal!!!!!!!!!

So of course, it's time to think about next year.  Remember when I mentioned that I would make an exception to the new buying ban for a new embroidery card for my machine because I couldn't drive to the wonderful Twin Falls Sewing Center to get one?  On a whim, I emailed them to see if they could still get them and if it was possible to mail them.  They not only had them--they had them for HALF of what they have cost me in the past.  I called them Wednesday afternoon to say I would take two (as there will be no advanced warning when the things are discontinued permanently), and yesterday 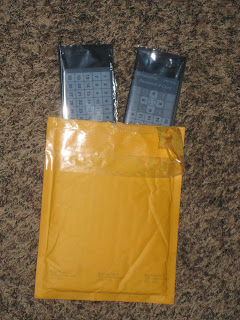 they arrived in the mail.  In static bags to make them last longer, which they don't come with.  All things considered, it's probably best that I can't drive 4 hours round-trip right now.  If I could get to their shop in person, I'd probably have wiped out all my savings by now.  They made my week, and now I don't actually need an exemption on a new crafting buying ban--which makes it a lot easier for me to stick to, weirdly enough.  I also remembered to check on the magazines I had decided to renew, and had indeed forgotten Sew News, which is fun and not quite so far over my head as Threads often is.  I had almost not renewed because I go back and forth on whether I use magazines or if they are just clutter, but $20 for a magazine that will give me something new arriving regularly throughout the year is a great way to stay "on the wagon" as it were.  So the NEW start date for the buying ban is tomorrow--November 16.  It's a sloppy date which sort of drives me crazy, but it will keep me safe from any Black Friday/Cyber Monday temptations, so I can live with it.  Especially now that there REALLY is nothing I need for another year of crafting.  :)