When one has been making Christmas decorations for 11 months, it's kind of a strange realization that Christmas is actually coming soon.  All year it's been a very distant sort of idea, and BAM!  Here it is--the week the trees actually go up! 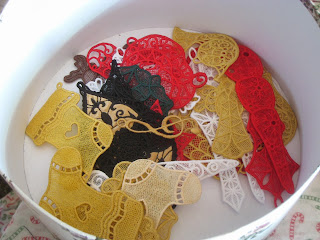 since there is really nothing I won't put off until the last minute, I have been soaking and drying the rather large stack of free-standing lace ornaments.  The gold stockings and treble clefs are actually left over from LAST year--guess I didn't feel like washing and drying them last year either.

I've been wrapping gifts, as well as 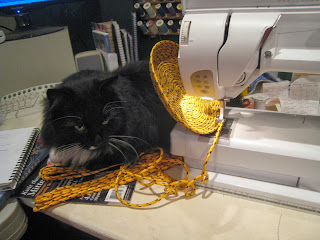 trying to make some.  Theo hasn't been interested in sewing for a while, but 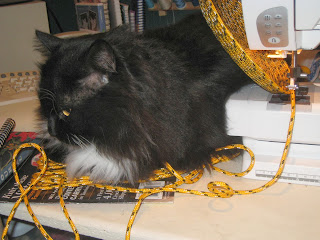 there wasn't rope to lay on previously.  It seems to be right up there with laying on patterns and fabrics a human is trying to cut out.  Needless to say, there isn't a finished bowl just yet.

And speaking of unfinished projects, 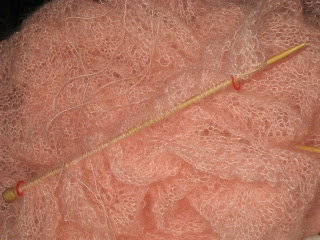 I worked on another WIP yesterday.  I'm closing in on finishing up the 8th pattern repeat.....out of 19.  I need to start the engagement gift, but this had been on hold for a while because I had finished up the first ball of yarn and couldn't find the other two.  Amazingly, the missing lace yarn was in the lace bin along with the green mohair.  Go figure.  So, I thought if I can at least start the new ball AND make a little progress, I won't feel so bad about starting another project.  There is a baby sweater that is really, really, REALLY close to being done.....but I have no idea where it is.  I know it still exists as I ran across it when we redid the sewing room, but I didn't think to put it somewhere that made sense.  After I get the house decorated and finish up the remaining gifts, I plan to do a massive cleaning/organizing project in the sewing room.  With the Year of Ornaments ending and the Year of 100 Finished Project starting, it would be nice to see my cutting table again.  Who knows, I could even start CUTTING things on my cutting table again!  WILD TIMES!!!!!