There was sewing today!!!!!  Not that Theo cared--it was sunny today so he went out to find me a mouse--which was thankfully dead before I received it.  If I weren't a cat owner/staff member, dead animals in my house might freak me out.  As it is, it's more of a "Whoo hoo!  At least I don't have to catch it" sort of thing.

Anyway, we can add 4 gift bags (which I'm counting as 2 projects because they don't feel like 4 projects and I'm not stupid enough to call them 1) to the "finished" tally: 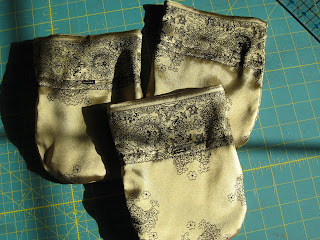 You've probably noticed there are only 3--the 4th had a tragic incident involving a cup of coffee, and has been rinsed and is hopefully drying safely in the bathroom (you never know with dry-clean-only fabrics).  I had intended to make lots more bags because I thought they would be really cute to put jars of jam in, but after wrestling with this very ravel-y fabric through 2 wine bags and 5 jam bags, I decided that making both the gift AND the gift bag went shooting right past "over-achiever" into "needs professional help."  So we'll stop here.

Tonight will be spent with this 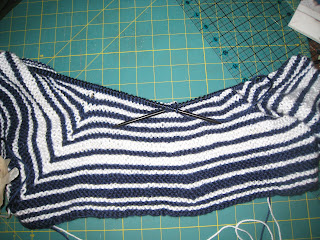 which is a Baby Surprise Jacket that I cast on a couple days ago when I had taken more cold medicine and needed a simple project to work on.  It was in one of my "project bags" for the year, so it was sort of a surprise.  Unfortunately when I went to add it to my page on Ravelry I discovered that I hadn't ever accounted for the yarn, so my stash tally grew a little in the process.  I suppose it comes from being a bit of a yarn snob--I'm using Caron Simply Soft, which is a cheap yarn that I probably didn't want to admit to using to the knitting world, so we'll just keep it our little secret.  I've only used it for BSJs, but it's so soft and babies grow so fast that I thought the babies would outgrow it before the yarn started looking too shabby.   Or at least that's what I'm hoping.

So, today is the 15th of January, and in order to reach 100 projects for the year I need to average just over 8 projects every month, and I have just reached "4."  I am actually ON TARGET!  Okay, with 350 days to go it's probably too early to get really excited, but I thought I'd be behind already, so this is actually quite exciting.  I wonder if I can stay on track all month????  Er, all year, I mean........