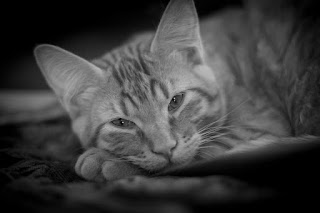 Our little Milo is sick, and the vet says he's dying of a virus called FIP.  He's neither eating nor drinking on his own and I've been force-feeding him for a week now.  The problem is that there isn't a definitive test for FIP--it's more of a matter of elimination and I kind of feel like this vet is basing her diagnosis on something that might be unrelated.  We have him on an antibiotic for what the other vet in the practice thinks might be the problem and we're just keeping our fingers crosssed.  He's not showing any deterioration and aside from being lethargic and really hating the force feeding, he seems to be in decent spirits, and we're enjoying having some extra time with him if we are losing him.  The other kitten was very lonely when he first started feeling bad, but now Theo is playing more with her and we're spending more time playing and cuddling with her, so she's doing okay.  It's just been a very sad and emotional week.
Posted by Toni at 3:10 PM 6 comments: