It would be hard to say whether the hour in the pool turned out to be good or bad, because yesterday morning while doing leg squats propped against my exercise ball against the closed bathroom door, the door swung open on the 10th one and I fell.  Right on my ego.

Apparently even Theo can recognize a cry of surprise, because Andy only beat him to the hallway by a few seconds.  Tonight I'm feeling good enough to know that I didn't do any serious damage, but yesterday was really, REALLY painful, and I spent the day on full medications and the heating pad.  So, if I was at all sore from the pool, it was pretty much covered up from being sore from a losing battle with a door.  Thank heavens THAT didn't have to go on my medical record.  The turkey incident was bad enough...........

There was some very simple knitting, starting with finishing the green ball, 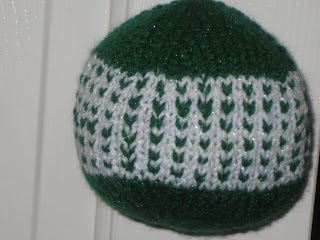 then stripes when the drugs were at their strongest, 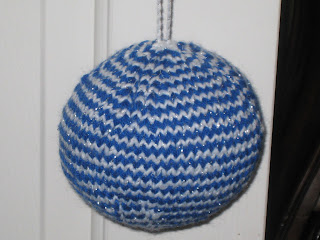 then getting a bit trickier as they wore off. 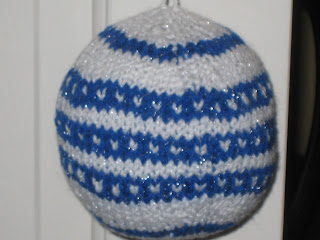 I tried working on the new sock a bit as well, but charts and drugs aren't really the best idea.  Of course, by about 2:00 in the afternoon I got the wild idea that I should start a new lace project (because drugs and lace would be such a great combination), but thankfully the sewing room was too far away and there are two Rubbermade containers on top of the lace one, and so all lace yarns were safe from my drug-inspired lunacy.   Turns out, there are a few perks to having a gigantic stash after all..................