Thursday and Friday were taken up with canning and exercise and all that sort of thing, but since I'm really, really, REALLY tired today, it's a sewing day!

First I set up Jeeves to start on two denim bags for gifts, 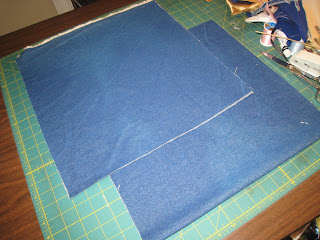 and got this far 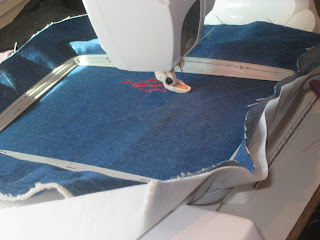 before I remembered that I should change to a heavier needle for denim. I don't think I've embroidered on denim before, but it is a very heavy fabric for a regular embroidery needle.  Luckily, 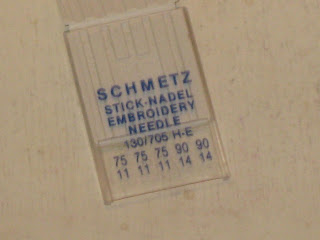 the last needle in this package was a heavy embroidery one, which never happens.  I'm a bit delighted to have used up another package of machine needles, because 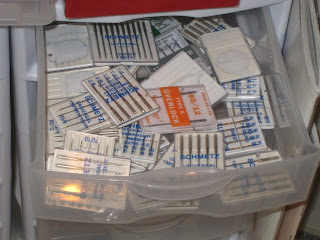 I have a stash of those as well, but that's almost mandatory.  Between the ones for different fabrics, different threads, and having 4 machines, I go through them regularly.  I don't always remember to change needles for each new project, but I try, and every time I have a problem, the first thing I do is to check the needle.  These are expensive machines, and I'd rather pay for needles than machines.  But it does make me feel good to be USING what I have.

While Jeeves was working, I started on a new idea: 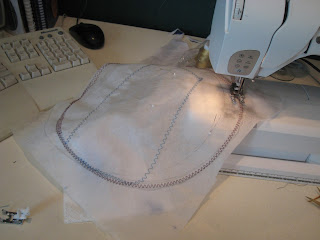 I had originally thought about making a thread and ribbon scarf on water soluble stabilizer, but I saw a thread bowl and thought that might be a fun idea.  The pattern I saw I actually didn't care much for--it was a bunch of odds and ends sewn together between two circles of water-soluble stabilizer, then shaped over a bowl as it was drying.  I thought the example looked like a big snarly mess, but I liked the idea of a thread bowl, and since I have a huge box of Coats and Clark thread that really doesn't work in my machines for normal sewing, I have thread to play with.

I traced a circle onto two pieces of stabilizer, and originally was just decorative stitching over the top of it, but I discovered that 1. this is a time for the walking foot, and 2. even with the tension lowered, some of the cheaper threads are NEVER going to work for me.

Once I settled on the walking foot, I decided this would be a great time to do one of my physical therapy exercises, 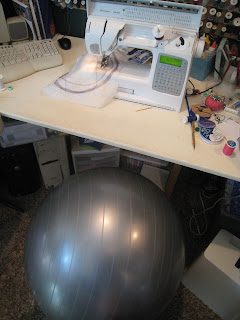 which is to sit on this ball and rock back and forth, side to side, and in circles for at least 15 minutes a day.  Normally, trying this while sewing is a great way to land on one's backside, but because I was just doing circles and swirls, I could set my machine to go without using the pedal: 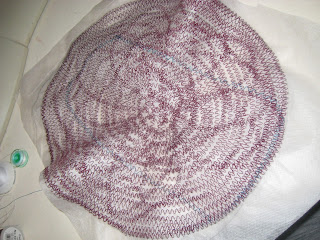 and it's really a rather relaxing thing to do.  I'm going to use many layers of colors (borrowing the free-standing lace principles), so it's going to take some time, 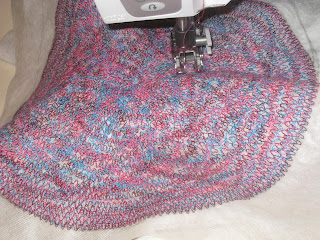 but my therapist will be thrilled that I have finally found some way to get in my full 15-60 minutes on that ball.  I do everything else, but I've been so busy that the "sitting" part has been a struggle.   It's a great exercise for anyone to do, though it's best to start slow.  It works the core muscles MUCH more than it seems to do at the time, and trying it all-day on the first day is a terrific way to get sore muscles.

Aside from that particular exercise, I haven't finished anything yet today, but 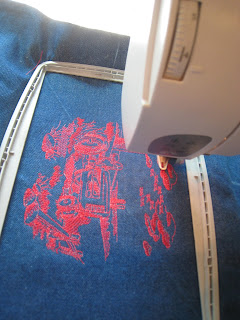