Sad, isn't it, that there is a part two? Thankfully, there is no Part Three. Just really long parts 1 and 2.

MS3 - no picture, no progress. This unloved project is 30 rows from being done, and yet I haven't touched it in a month.

This is a baby aran sweater that I started making when a close friend announced she was pregnant, 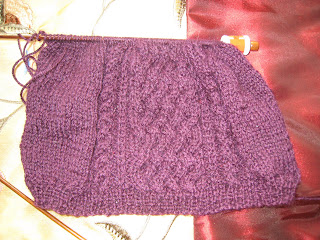 and put away after she had a miscarriage. Still, I love the color & the yarn & the pattern, so when they're ready to try again, I'll finish the sweater.

The next sweater for my husband, 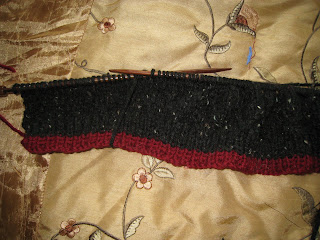 which I put away after discovering an error & being too lazy to figure out said error. I have it on this year's "to-do" list for July or August, so there's hope.

I am in a sock rut. This sock 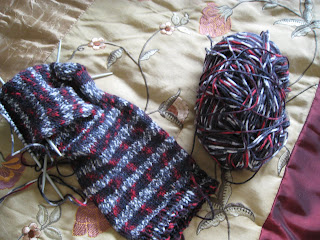 got derailed because it isn't my normal sock pattern, and requires some pattern consultation, so it lost "purse sock" status to those of my normal pattern which I know by heart. I CAN branch out! I will finish this sock with little to no whining!!!

I started this shawl last summer to have a portable project for our trip to Seattle, 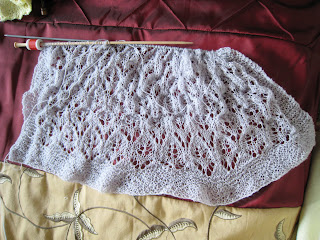 and things were moving along nicely until I broke one of the bamboo needles. I think I was able to pick up all the stitches onto another needle, but haven't had the courage to check. Obviously, I have some cowardly knitting spurts once in a while. The pattern is from Cheryl Oberle's Folk Shawls, though I think she has the sense to use a heavier laceweight.

Also from Folk Shalws, the Fir Cone shawl which was zipping along, intended for a friend's 50th birthday, until the friend mentioned she would rather have something BESIDES a shawl. Good to know--shawls are a lot of work for someone who wouldn't wear them (well, they're a lot of work for someone who would wear them, but at least it's worth the work then). 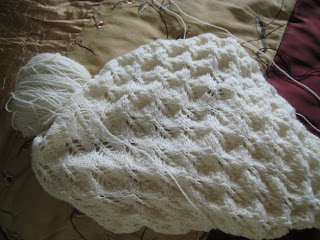 I've completed the center, just picked up the outside border, and could finish it without too much time & effort. "B"

A baby sweater I had started working on sometime before I sold my house, 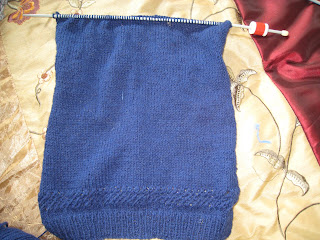 and first the pattern got packed and I couldn't locate it, then when I found the pattern I couldn't find the sweater. (You'd think I could learn to label moving boxes after all this time) Everyone is located & will eventually be finished, but probably not this month.

What I assume to be the matching bottoms to a newborn sweater I made for a nephew who is now 5 years old. The sweater I finished, it's adorable, and has been worn by his little brother & sister as well, but I decided that my sweaters really don't need matching bottoms. 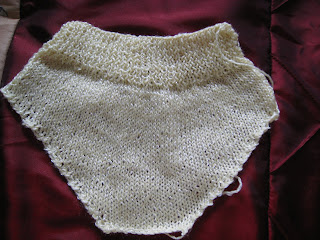 Knitter's magazine ran some patterns for angel tree ornaments, and I was struggling so much with the #10 crochet cotton that I tried Knit Cro-Sheen-- 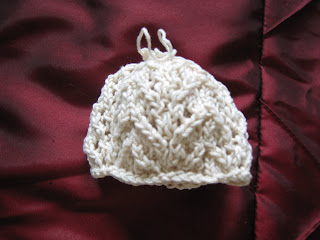 Not nearly as delicate, but far easier to work with. I'll think about this one....Christmas gifts for next year??????

A sweater that I was going to surprise my husband with, and got this far when I ran into 2 problems: 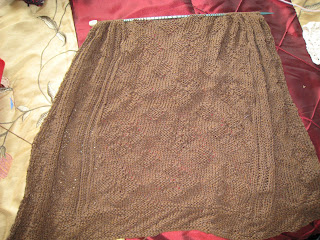 Massive typos in the pattern, which would require a lot of frogging to fix, and the fact that my husband really hates brown clothes. So....... 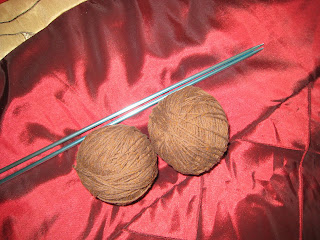 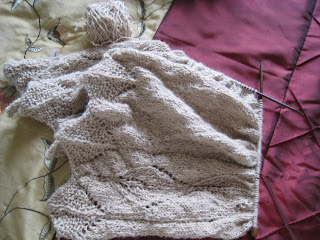 progressing nicely. I am such a child sometimes.

Chenille blanket - so close to being done that I haven't taken a new picture--hoping I could power through the last bit & post a picture of it FINISHED rather than IN PROGRESS. So, let's just leave that one "pending."

So, 2 WIPs frogged, 2 thrown away, nothing finished just yet, but close. And just under 3 miles of yarn from the stash used so far this year!!!!! Whoo hoo!!!