So The Knitting WAS Going Strong.....

The revised version of Andy's birthday sweater is zipping along, and everything had been going reasonably well.  I'm knitting it in the round, and aside from the occasional need for a purl stitch or two, it's pretty mindless.  So mindless, in fact, that with the aid of my little Bookmate helper 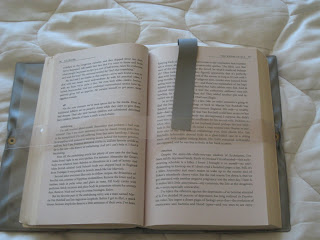 to hold my book open, I have polished off two books and am on to my third (The Know-IT-All, about a man who sets off to read the entire Encyclopaedia Britannica--who frankly sounds like a man after my own heart).  I was even pretty cheery considering that until I finish knitting up the rest of the yarn from the back that I'm frogging, 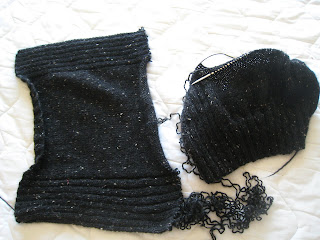 I don't get to count ANY of this yarn on the stash-busting tally as it's already on there.  Still, I've made it through the yarn from half a front and more than half of the back--helped of course by the fact that that bottom edge is STILL rolling and always would and there would have been no point in deluding myself any longer.

BUT, I made the ultimate mistake this afternoon.  I picked up the sweater to knit, but without a book.  I thought it might just be nice to sit and knit and think about nothing.....which is not possible.