One of the things that I hoped the "100 Projects" project would do is to force entice me into finishing some of the sewing and knitting WIPS laying around.  I mean, let's face it--the idea of starting and finishing 100 projects in 365 days is a bit crazy....even for me.  While it seems to have had no impact on the knitting WIPS, this weekend I did finish 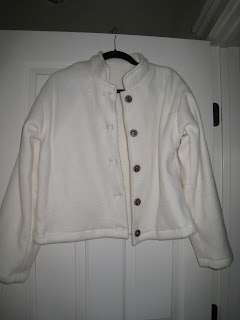 I apologize for the rather bad picture--I didn't realize it was that bad until I had already thrown the jacket into the washing machine.  I'm about 50% happy with it.  The thing is supposed to have shoulder pads, but I have really broad shoulders for a woman, so that part looks fine without them, but the sleeves are unbelievably long--and not in a way that would be fixed by shoulder pads.  In stocking feet, I am 5' 8" tall.  I don't have short arms.  In fact, I have rather long arms.  So, what Amazon tribe are the psychos at the pattern company using for models???????

Not that I'm not thrilled with finishing a project, but I was a bit disappointed to figure out that I'd only used one and a half yards of material on them.  From a space perspective, using up fleece is the best thing I can do, but it's a bit disappointing on the stash tally.  To make up for it, Theo and I started cutting out some silky pajamas for me (and yes, I do really have a thing for pajamas) 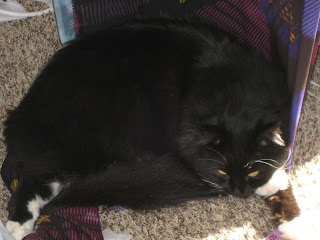 which will use up 5.5 yards of some material I bought on clearance somewhere.  Take THAT fabric tally!

On the knitting front, I've moved on to the sleeves of the cowl-neck sweater 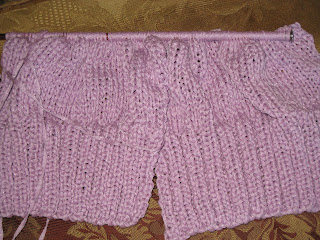 and since it's short sleeved, I'm about an inch away from the sleeve cap shaping.  I'm trying to finish one more project before the Ravelympics begin.  I have 5 days to get there.........