There is a finished Fun Fur scarf: 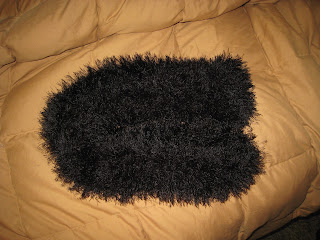 I almost added another yarn to it to double the yardage (awesome suggestion, Gaidig!), but couldn't think of anything cool to put with it that I could find without lifting bins, so plain it is.  Nothing like a little back strain making crafting decisions for one.

Because I ran out of the nonscary pain pills while Andy was gone, I resorted to the massive dizzy/sleepy ones, so the socks got a LOT of attention: 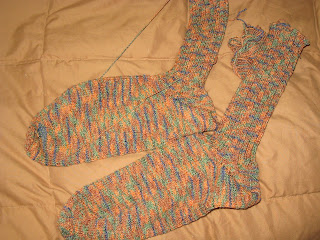 and are now ready for the finishing end weaving AND gave me "all used up" Ravelry stash entry number seventy.  There may be a party at 100.

The chemo cap was finished a couple days ago, but seems to have not earned a picture yet, but it's done, and I need 1079.35 yards of yarn by the end of the year to reach 20,000.  Meet new project number one: 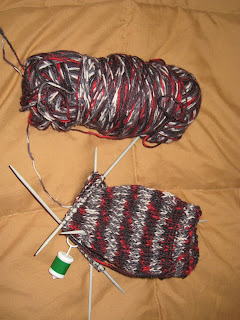 Magic Stripe plain socks with size 3 needles and sport weight yarn.  When they're done, another stash entry will be gone AND 330 yards of yarn will be used up, and I'll have some very warm wool socks to boot. 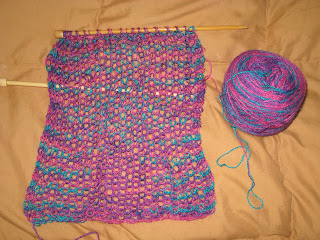 is another brioche scarf on size 8 needles, which will use 440 yards of yarn, but come nowhere CLOSE to using up my stash of this yarn.  I adore this colorway, and there was a mishap several years ago when it was being discontinued, so let's just say that I won't be running out of this particular yarn anytime in the near future.  Maybe not even this decade.  I think most of my favorite yarns get discontinued, but luckily I don't generally see it.  I know all my fabric is discontinued--having learned that the hard way with Andy's pajama debacle.  Not that they don't need new stock--I appreciate that--but why the clerk is immediately on the phone to the factory as soon as I've purchased just a quarter yard too little of the fabric is a bit of a mystery.  Really, even the Knitting Gods aren't usually THAT cruel.  They usually wait until I've had the yarn in my stash for at least a year before wiping it entirely off the face of the earth.  I have a sporting chance then--especially if my stash ever gets down to a reasonable knit-as-it-comes-in level.  IF..........................