So the bad news is, the cold is still hanging on. The good news is 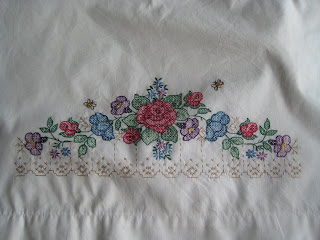 the February Project of the Month is DONE!!! I'd be gloating about getting it done in the first two weeks of the month if it hadn't actually been languishing in the craft bin for about 5 years. But, it's done, washed, and ironed. Now I just have to figure out where I put the other one. It's probably off somewhere with the pajama top having a terrific laugh about my organizational skills....

I even did a little work on the baby blanket 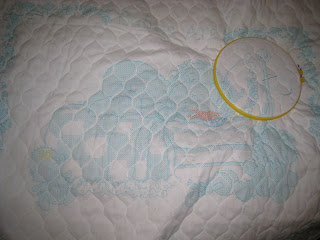 I did say "little," didn't I? Actually, there's a little more done than it appears--the blue I've been working with tonight is almost the exact shade as the ink used for stamping. A little scrounging in the sewing room has revealed that for some inexplicable reason, I have 3 copies of this blanket kit. Three--of the exact same blanket. I vaguely remember buying this on clearance, so maybe it's not just yarn sales that make one take temporary leave of one's senses. If a fourth kit turns up anywhere, I'm permanently turning my visa over to Andy.

In other news, after a few initial disagreements with my sidekick about what we were doing with the towels on the floor, 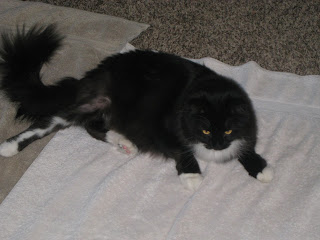 the pink blanket is washed and blocking 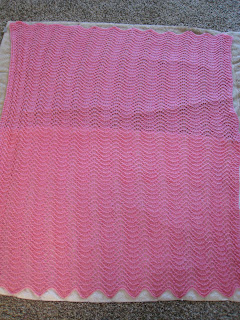 and so far there hasn't been a general furring 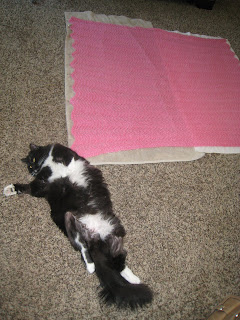 (I think it's still too wet). So far I have refrained from casting on anything new. If I can finish up the moss scarf 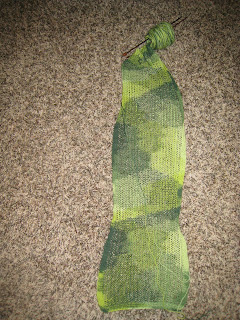 before the new yarn arrives, then I won't feel too much guilt about casting on as soon as I can get the box open. Not that I wasn't going to cast on for the Kauni cardigan even if I don't get the scarf finished, but I'll feel less guilt this way. This scarf looks better in person than it does in the photo, but I think it will discourage me from buying variegated lace yarns in the future. No matter what I knit with them, they look better as a skein than anything I've ever knitted with them.

Now I just need to figure out a fashionable way to go out wearing a couple hanks of lace yarn tied around my neck.......