Thanks everyone for your words of encouragement.  It is amazing what a destructive force alcohol can be at times--I had a long-standing friendship finally end a couple years ago because of my friend's drinking, and while I miss how the friendship once was, it has never been anything but a relief to be away from her behavior while drinking.  And that's a really sad thing to realize.

After all the party prepping over the last couple weeks, I have been unwinding this week, and doing a LOT of exercising.  After 70 minutes of walking yesterday, I've been a bit sore today so postponed my trip to the gym until tomorrow.  There has, however, been a new bowl, 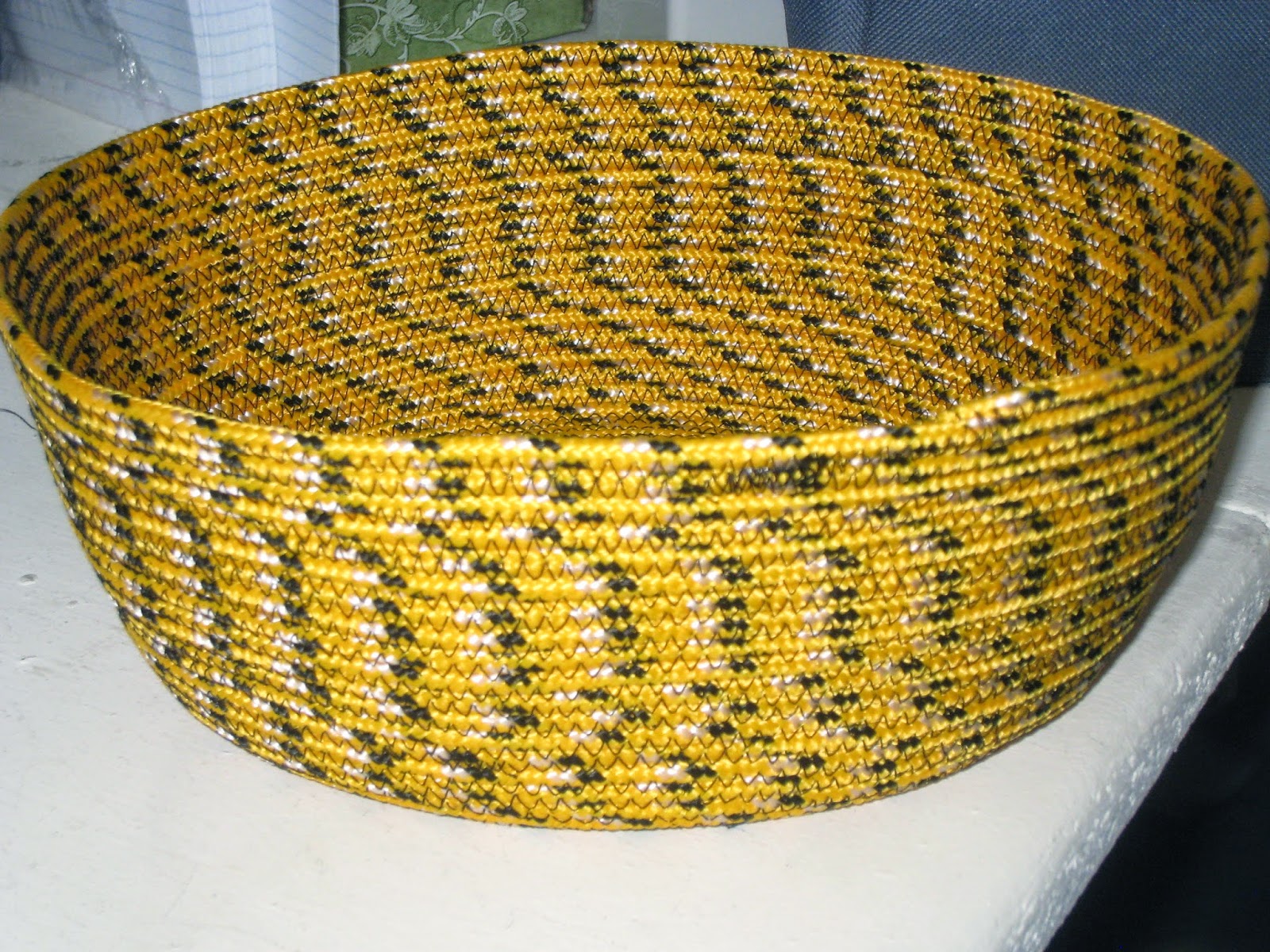 which I intended to be oval.  The odd thing about making bowls this way is that it is actually a bit difficult to achieve anything except round.  Isn't that amazing?  I couldn't draw a circle if my life depended on it, in spite of all my attempts otherwise my pizzas are almost always square-ish rather than round, and the one circular shawl I tried to make is basically a lace funnel.  But with bowls, even starting with a two-inch lead to set the shape, they just come out round.  Everything must have its quirks, I guess.........

Thanks to the extra exercising this week, there has also been extra time on the heating pad, so 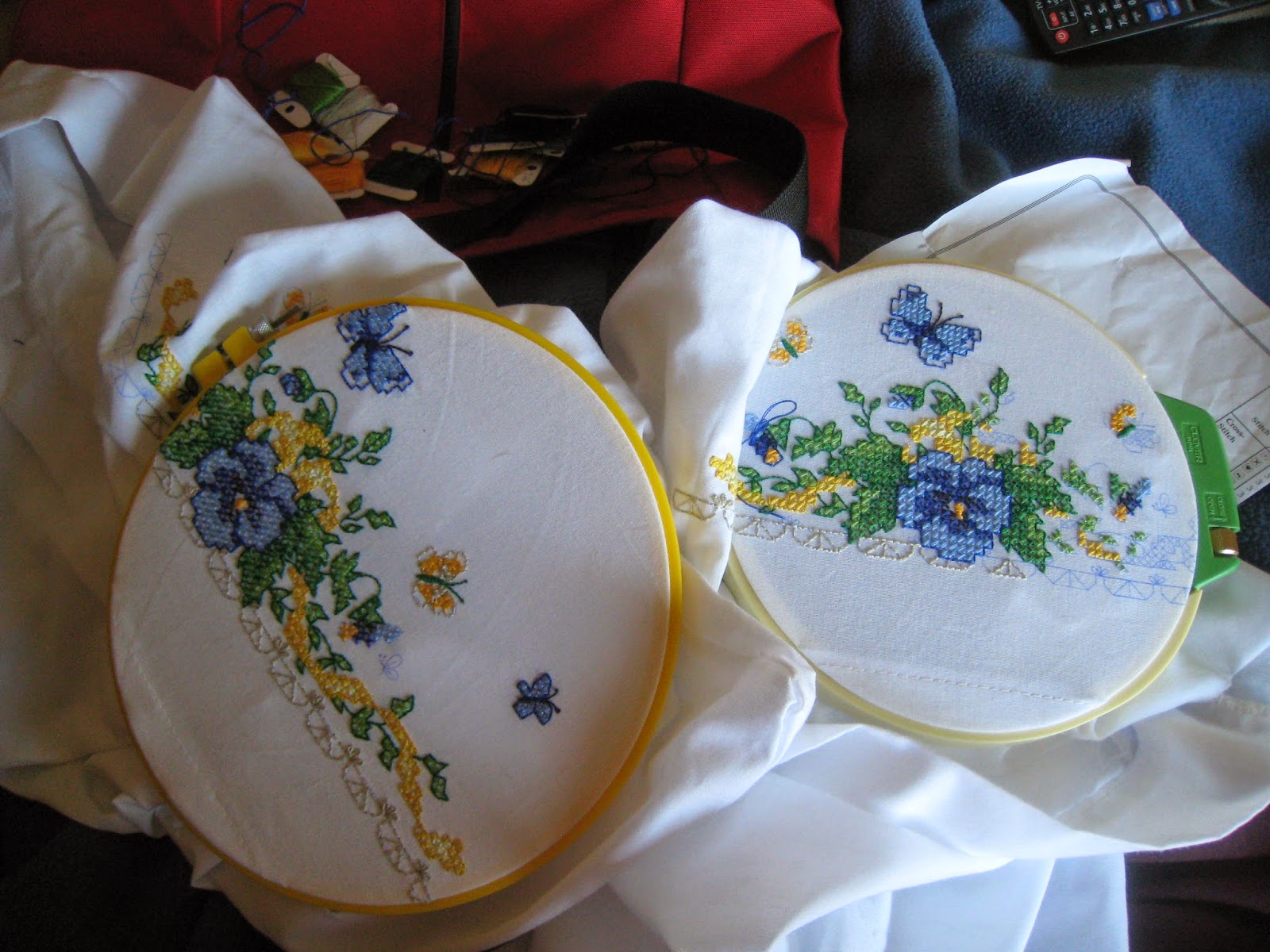 the pillowcases are actually close to being finished!  Can you believe it??????????  Okay, they're stamped cross stitch and not counted, but the only other set I've done spanned a few years and one move, so this is rather amazing.  And when it gets hot, these are SO much easier to do than knitting!  Though, 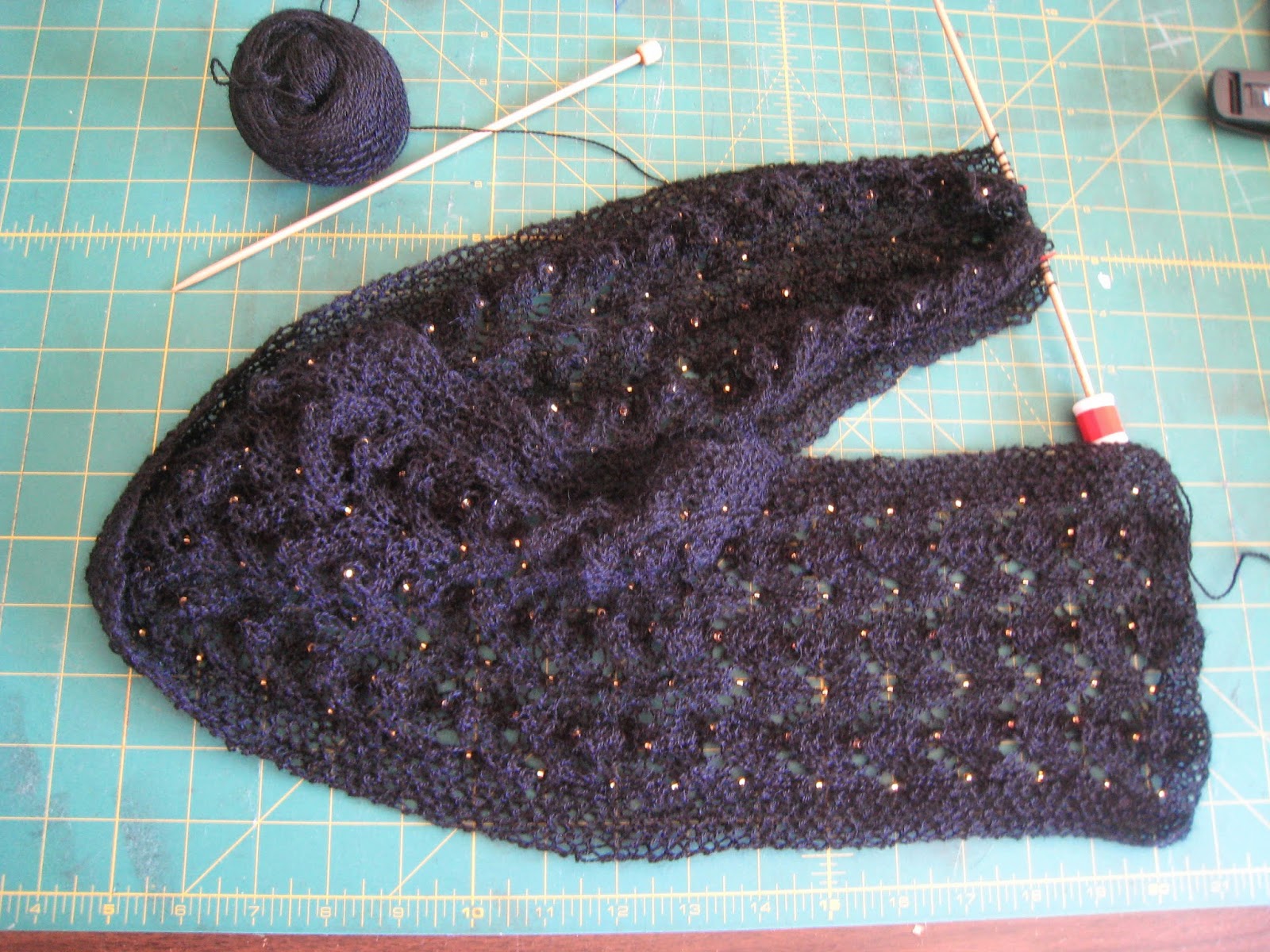 there has been knitting and beading!!!  Really, I just love how this scarf is looking, and it's a good thing that I really, really, REALLY like these women, because otherwise this scarf would be the newest addition to my fall wardrobe.  I can't even make myself one just like this, because this is all the black alpaca lace yarn I have in my stash!  I think I have just discovered one of my stash issues--it truly distresses me to use up a yarn in my stash if there isn't any more of it.....which is the way stash works, of course--it just isn't the way my maturity level works.  But it's going to be a kick-ass gift and I will be a grown-up about it.........

Speaking of being a grown up, 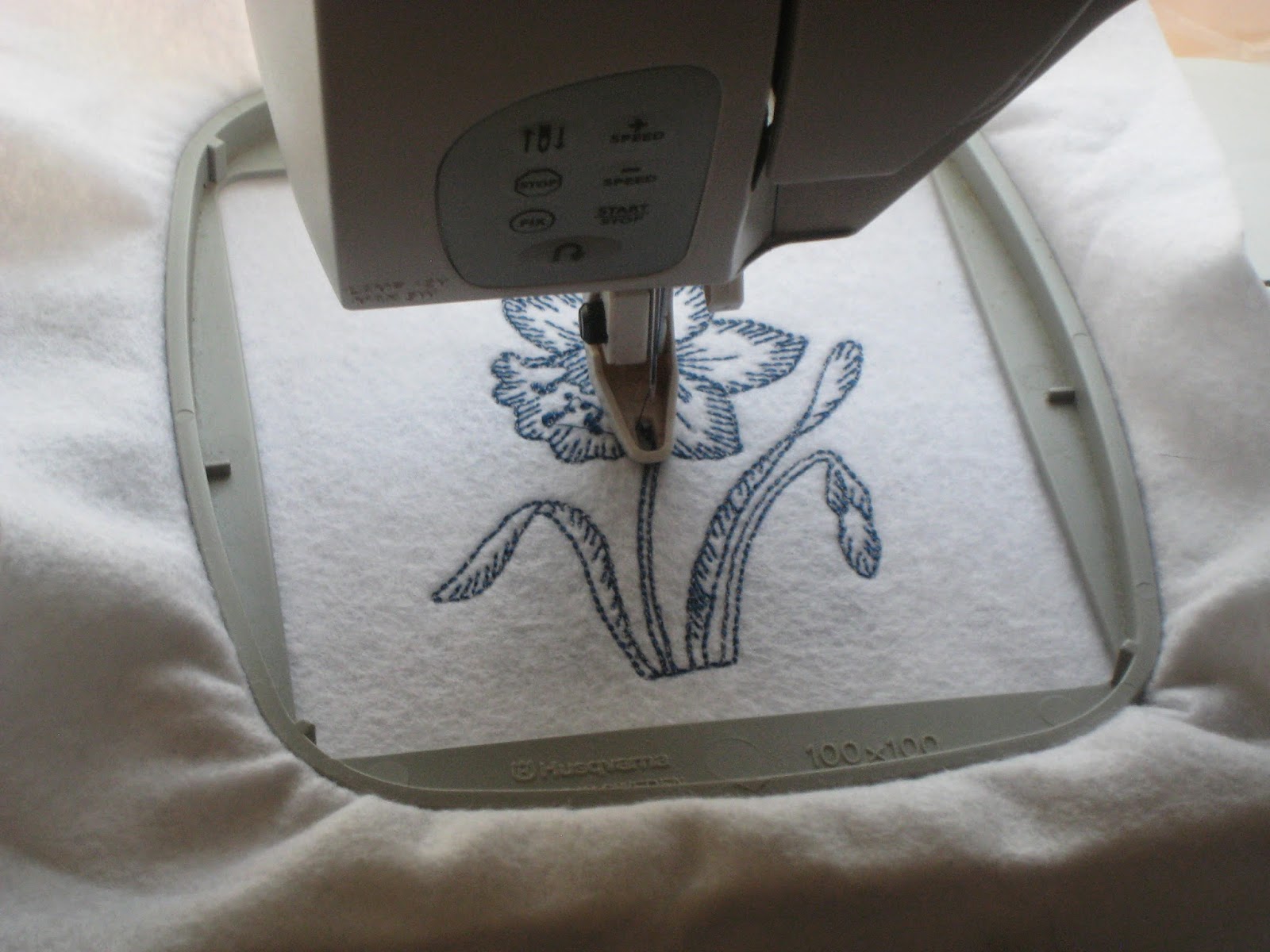 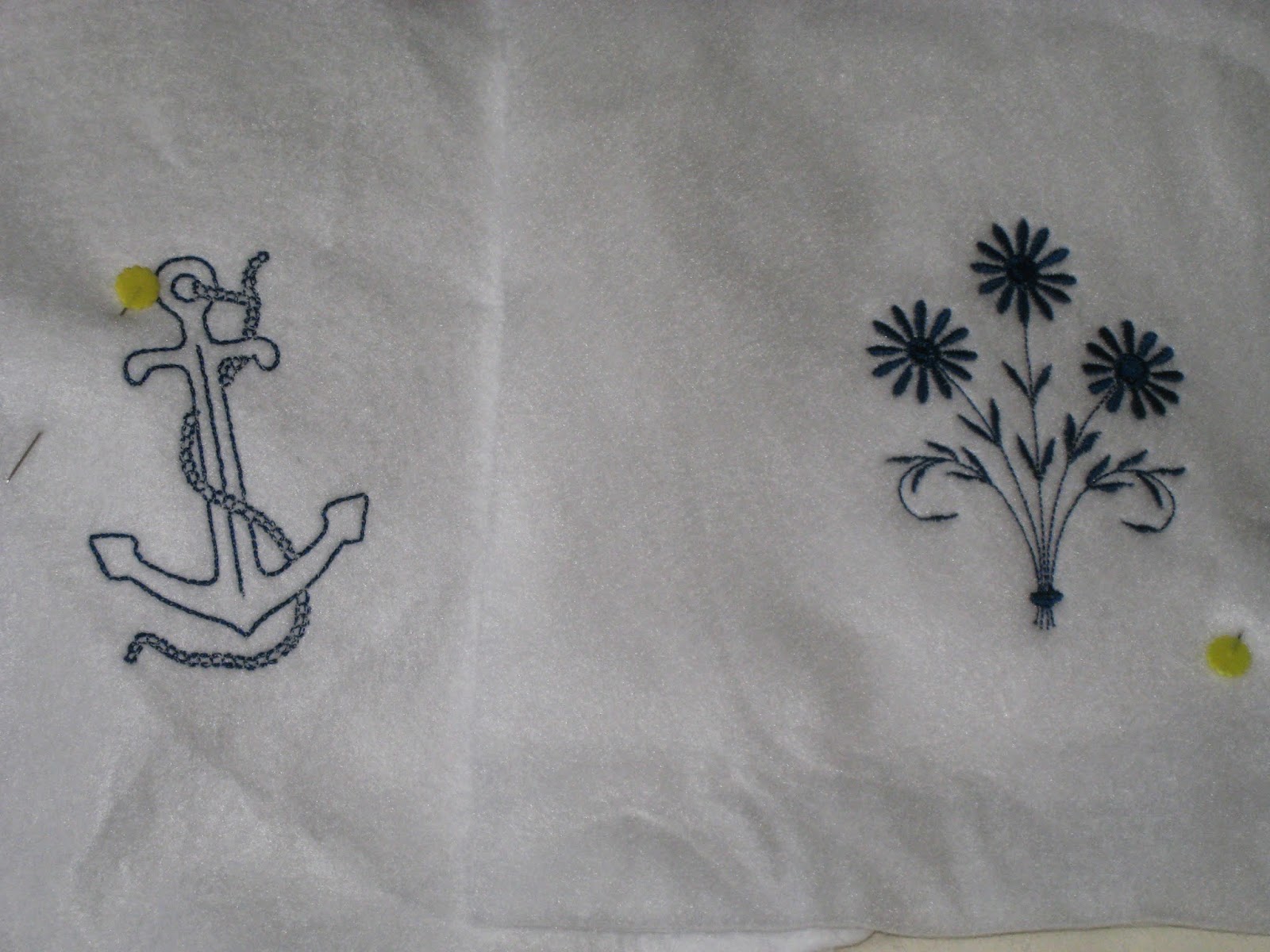 I've been making single color gift bags because I was irritated about the Halloween bag not turning out, but decided today would be the perfect time to suck it up and take on my most difficult machine embroidery project yet.  This: 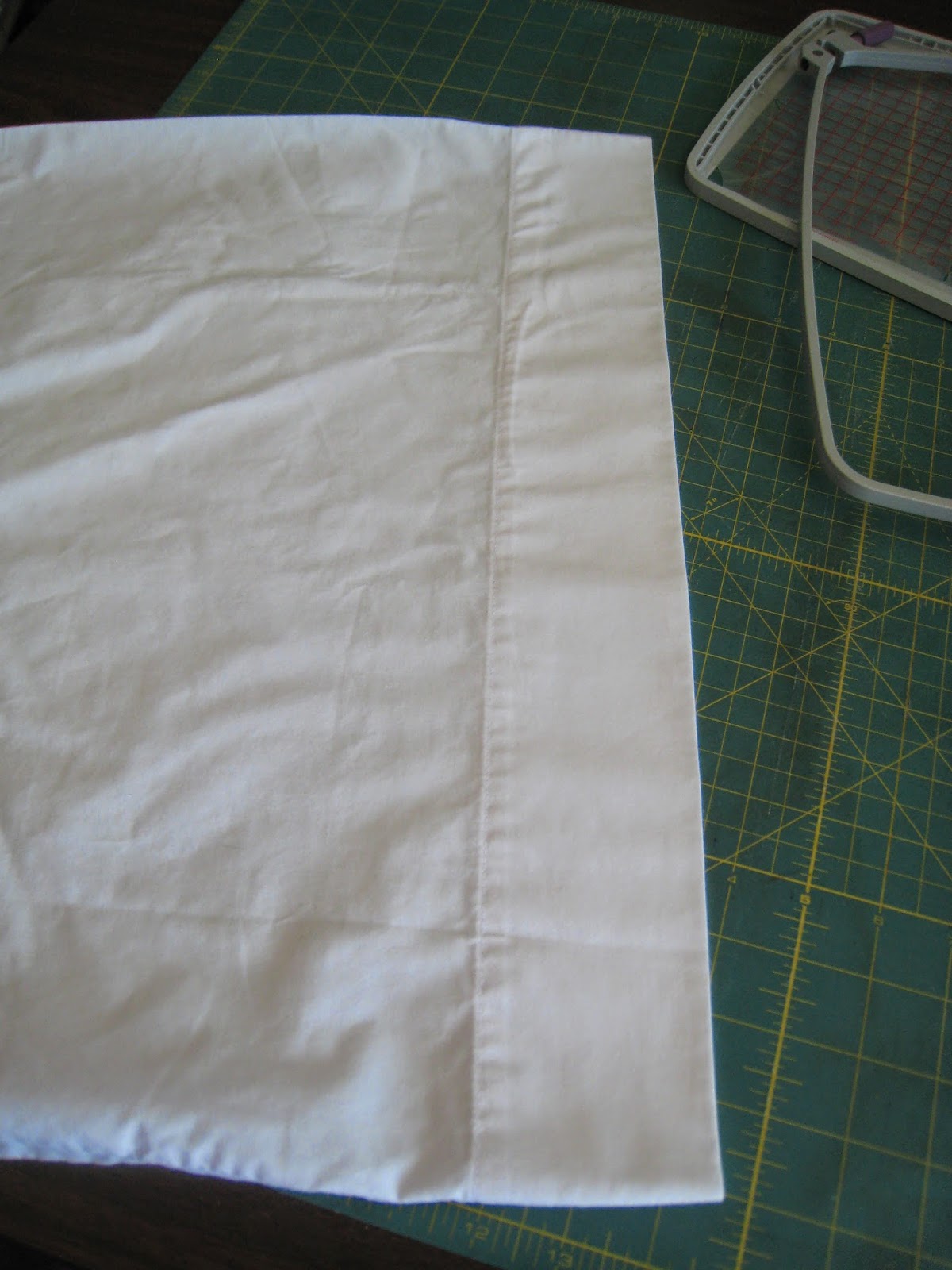 The bedding industry has simply no regard for the home machine embroiderer.  Nowhere on the package did these pillowcases state that they had a 3-inch hem on them that should only be attempted by the most advanced of crafters.  Nope!  All they cared about was washing instructions and thread counts.  Really, what can they be thinking?

Three inches is a bit of a problem, because even my smallest hoop, 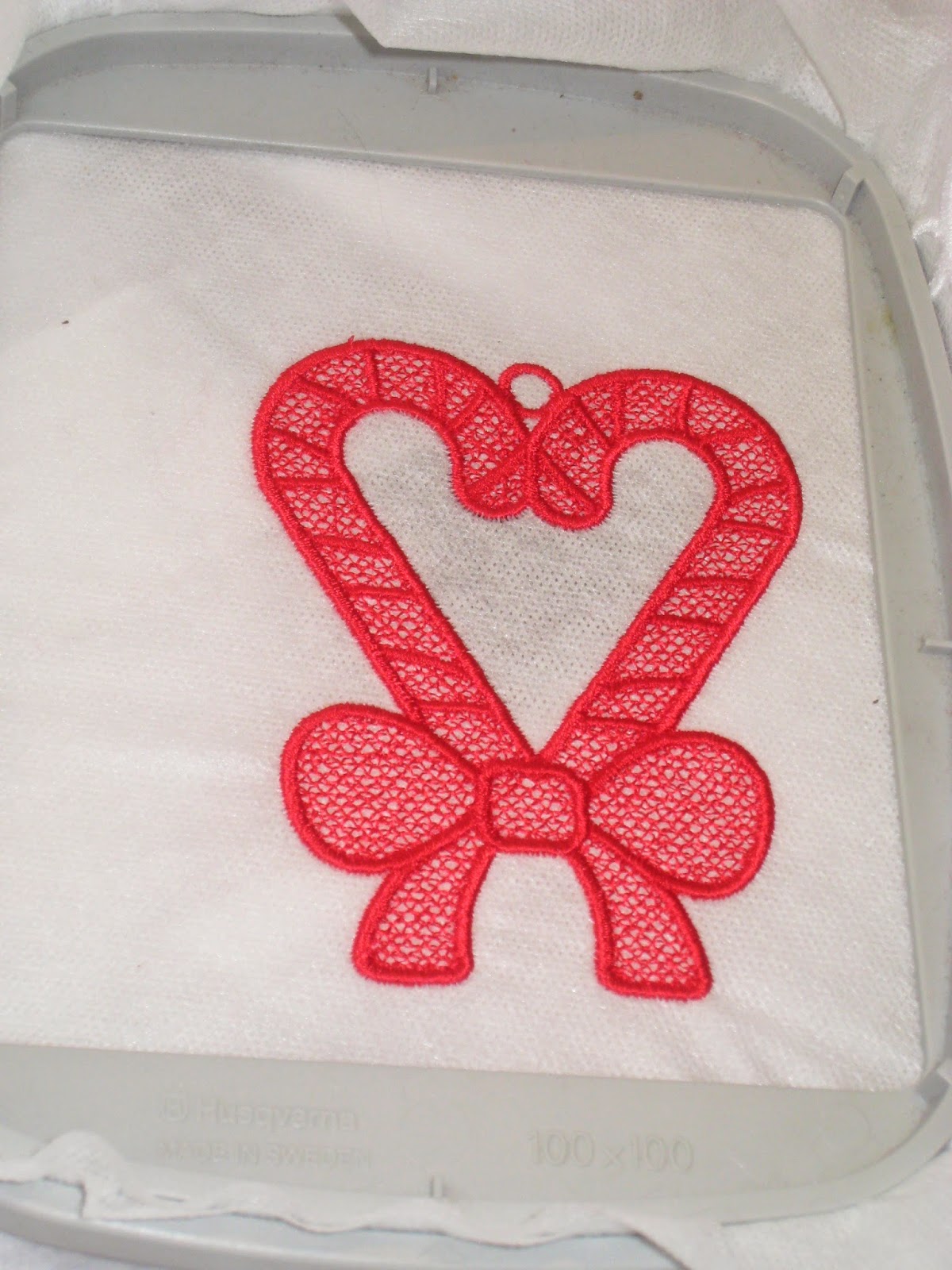 which I used to make a new lace ornament while I got all my whining out of the way, is 4-inches wide.  I had carefully measured as I laid out the design to make sure it was all less than 3 inches tall, but to hold it in the hoop is a bit more tricky.

I decided to use a cut-away stabilizer in case any of the design went beyond the hem into the actual pillow, 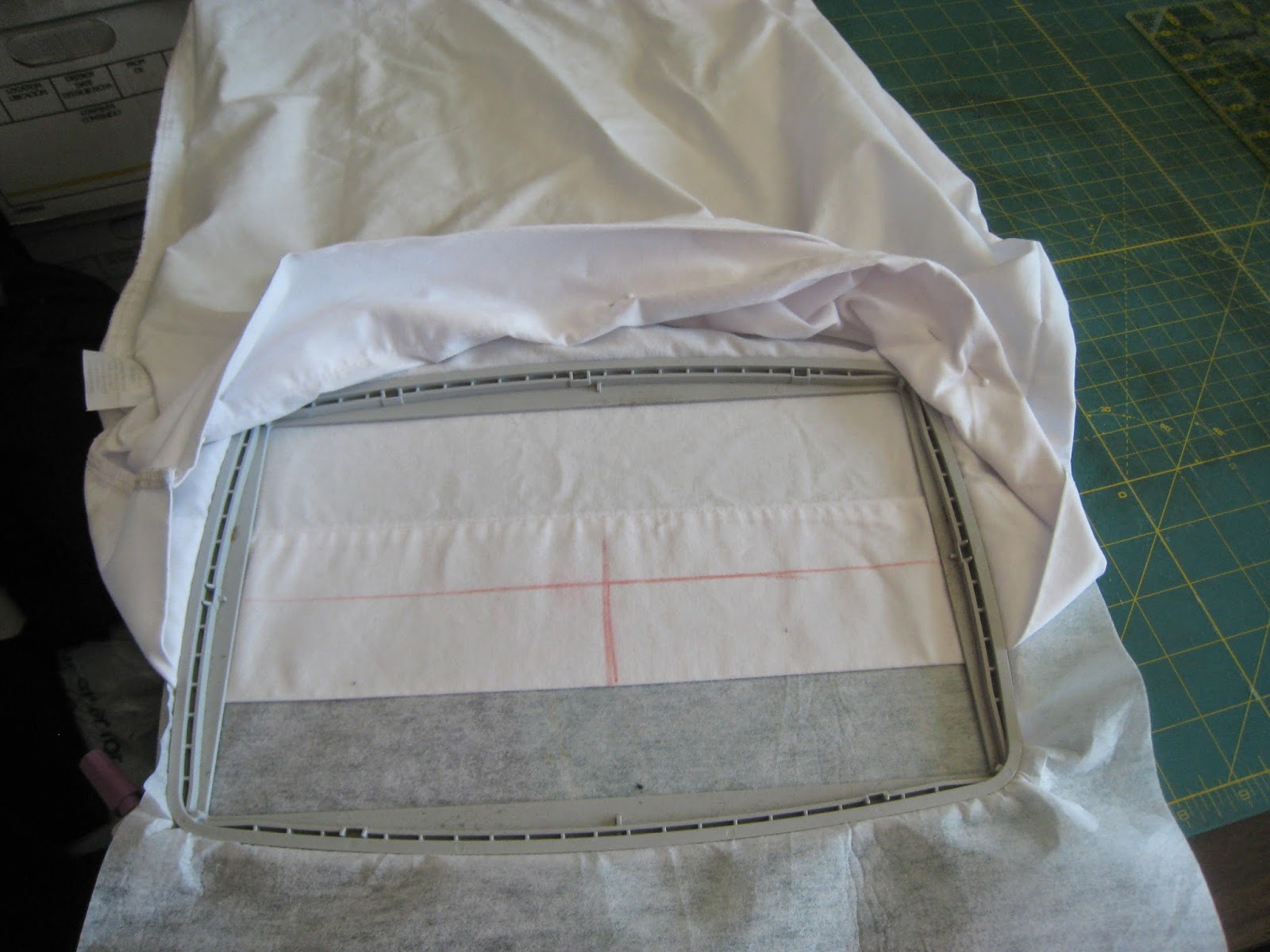 and used quilt basting spray to hold it while hooping. I even used the grid that came with my hoop to make sure everything was perfectly straight (which I usually don't take time to do), and even located the bag of clips that came with one of my hoops, 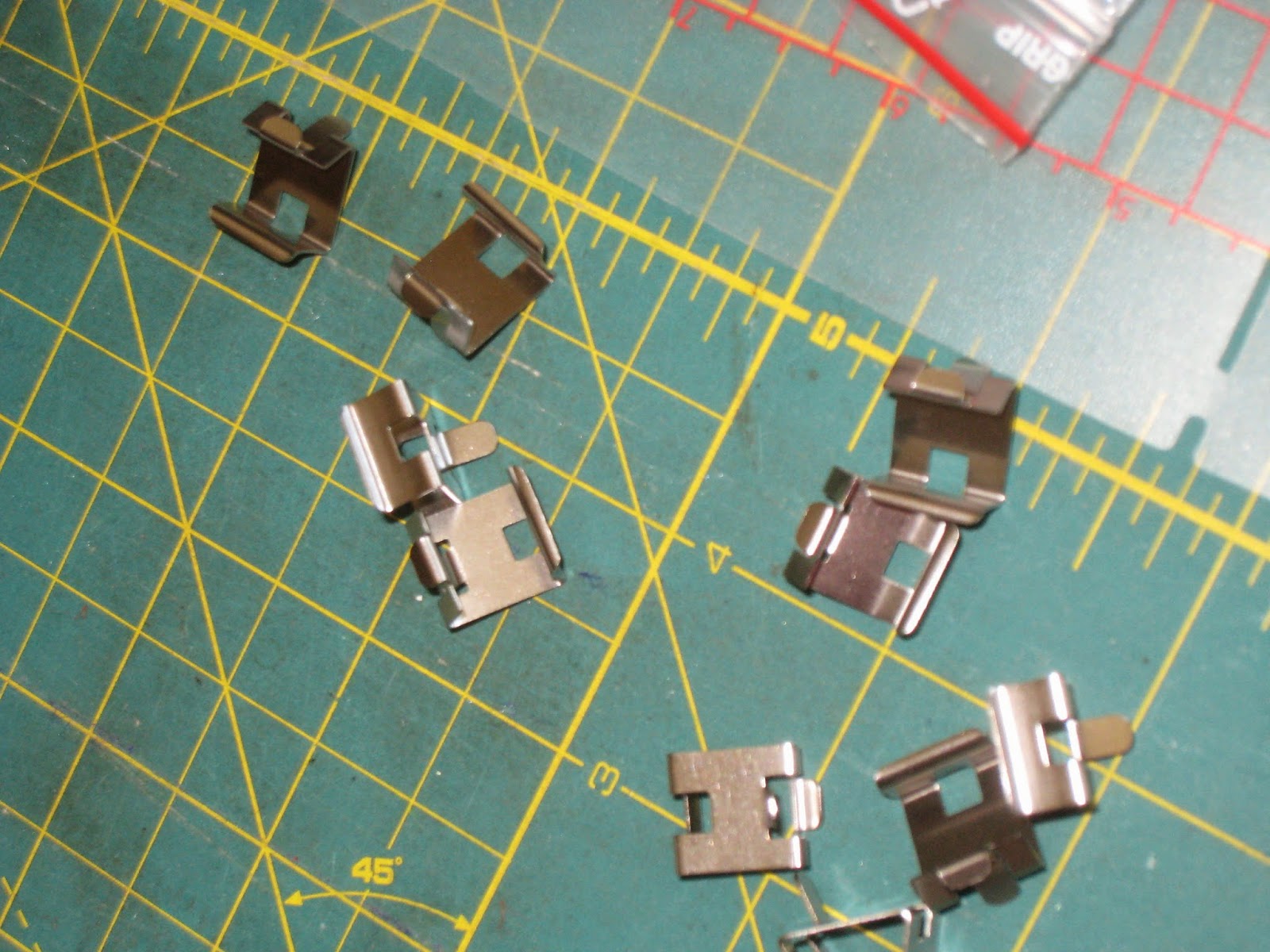 but didn't find the instructions that would explain exactly how they were supposed to help.  We'll put that down as "thing to be figured out for next time."  On that list, I'm going to include "why the grid for centering has the grid 'center' off to the left by not quite 5/8s of an inch."  I think this makes no sense whatsoever, and even after adjusting as far as I could with the machine, 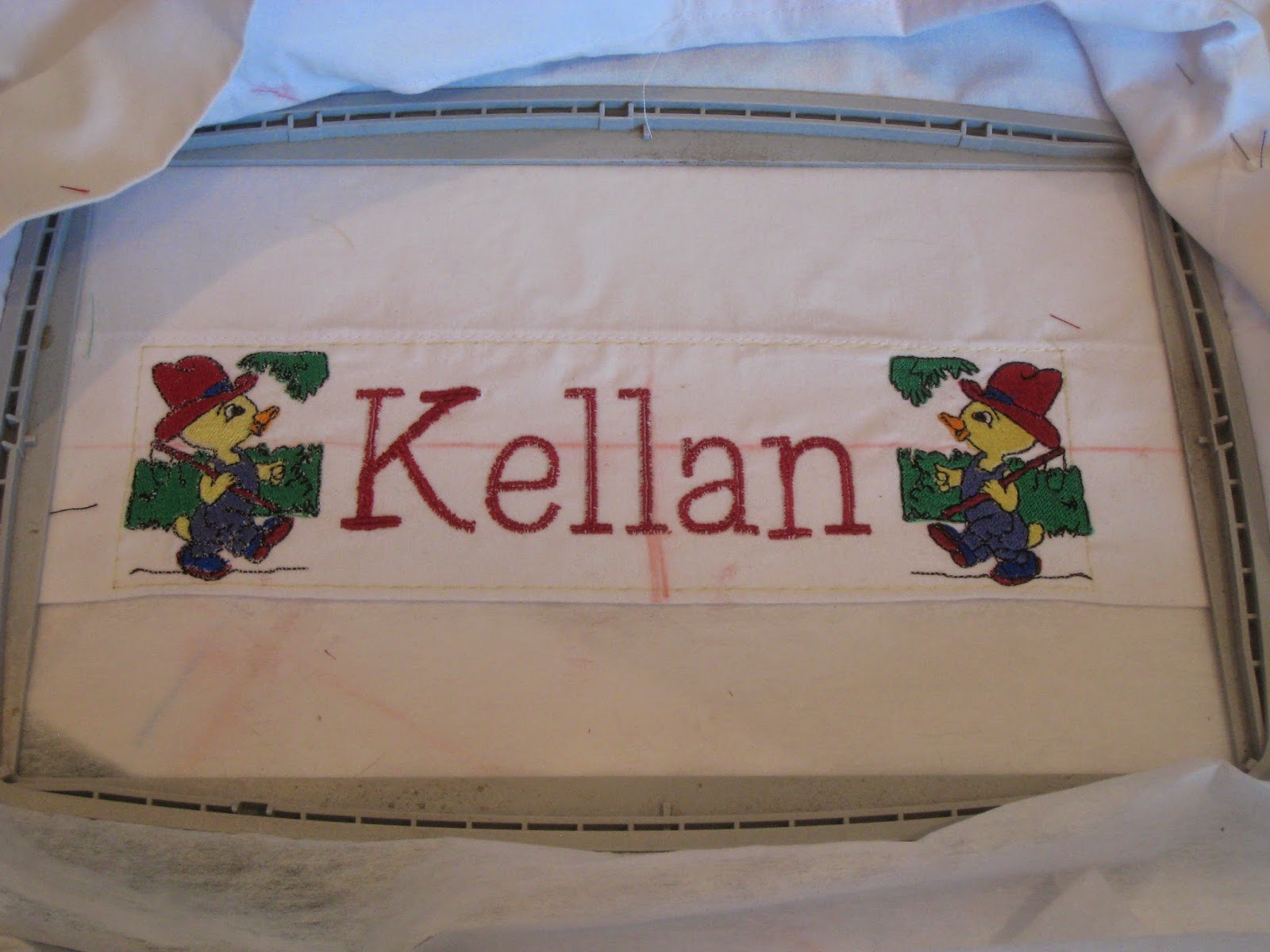 the first pillowcase is a bit off center.  For the second one, 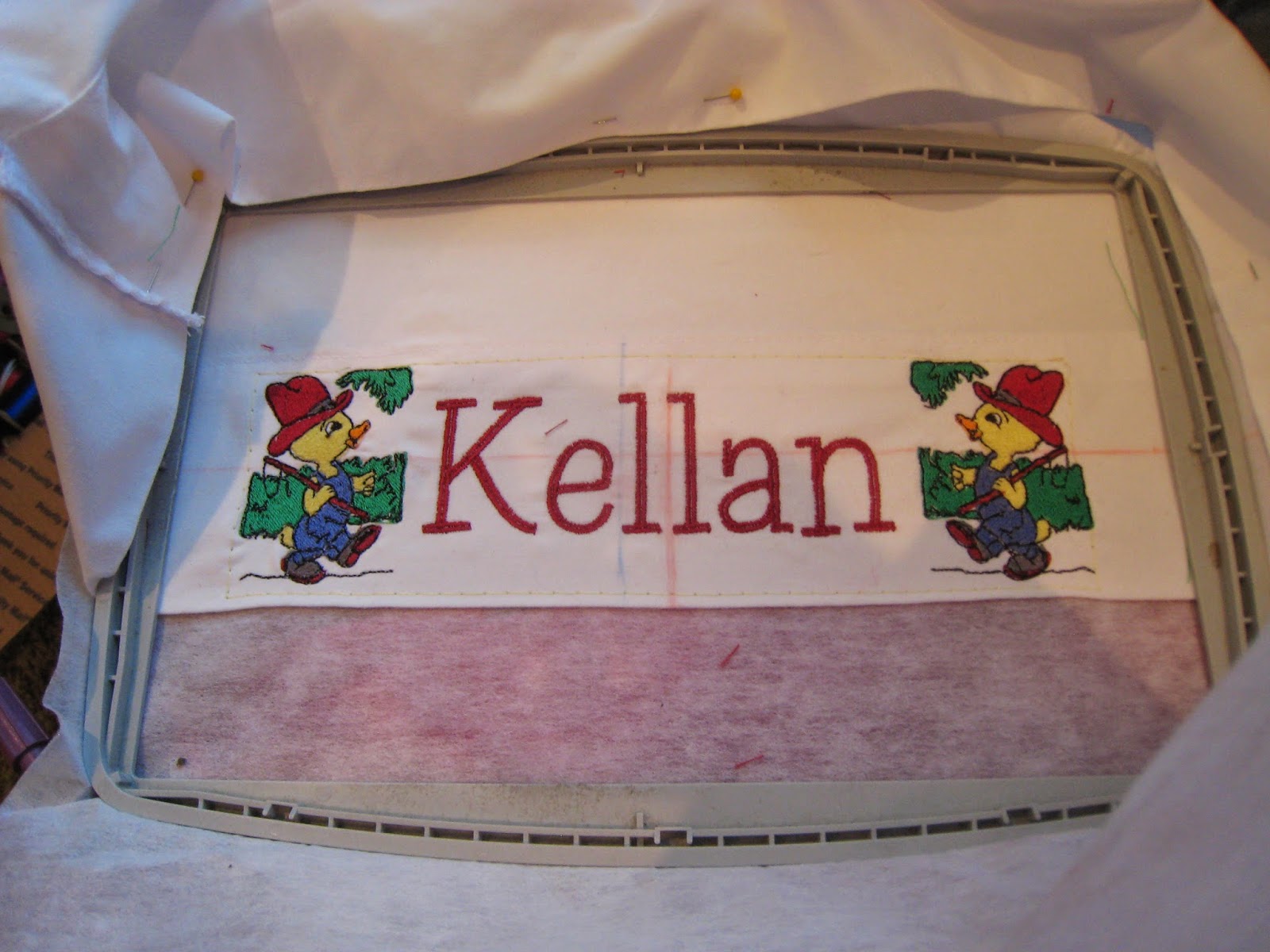 I marked the center of the pillowcase and made a line about 1/2 an inch to the left of the center, then used the machine to center just a bit, and that worked perfectly.  It took most of the day to make these--even with Jeeves doing all the work--because each pillowcase required 25 separate thread changes.  That means re-threading the machine 25 times PER PILLOWCASE.  Because I thought it would be easier to do each duck separately rather than having to deal with all the threads of the machine sliding back and forth.  To be fair, this was the better choice because even with the initial basting around the design, the back and forth could easily have upset this sort of hooping, but it will be a long, long, LONG time before I'll do something this crazy again.  At least until tomorrow, at any rate....................