As I have taken enough Valium to knock me silly and need to finish before it kicks in.  The good news is that the freak cold here is supposed to clear up by weekend, at least for a little while.  I'm doing better, but as soon as I get a little cold or a little sore, I tense up which makes me hurt a LOT which makes me tense up even more......and this little cycle just keeps going and I can't get it stopped without drugs.  The white chocolate martinis actually work a bit better, but I'm tired of them.  I never thought I'd say that, but I've never had them 3 nights in a row either.  I guess that makes them a pretty safe muscle relaxer, since if I can get tired of something that tastes THAT good, my risks of becoming an alcoholic are minimum.  Still, I'm ready for real life again.

I do see a lot of improvement in my back.  Today was really cold and I'd not slept very well, which led me to a day in bed last week, and today I was pretty mobile until afternoon.

Theo and I messed around with a project idea I'd seen somewhere on the internet (though, of course, I don't remember where).  Before Theo took over cutting 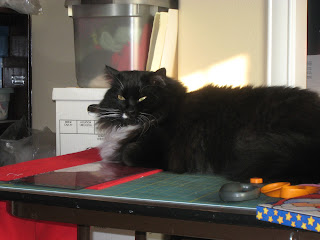 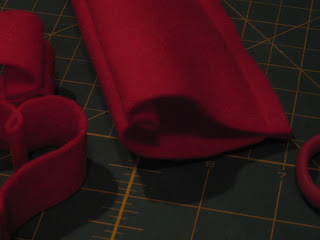 I decided it looked better with the fold on the inside, but it was easiest to make the first seam the one that joined the edges, which explains all the crazy turning inside and out.  Of course, better pinning and planning might have worked just as well.

After all that rigmarole,  I cut 1-inch slices from the end to make: 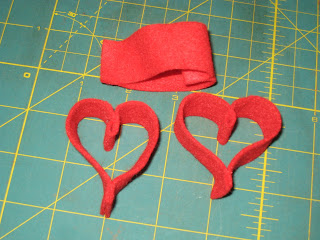 felt hearts!  I have white craft felt as well, so I'm thinking of doing a little garland here with red and white hearts, and maybe some beads.  This is as far as it is right now.  At this point, we moved on to: 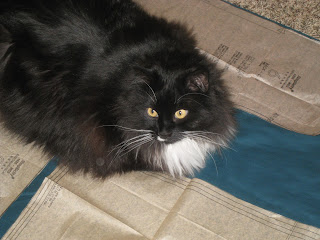 cutting patterns!  I decided it wouldn't hurt anything to at least get the pattern cut out, and as it turned out, in spite of the pattern's estimates, I had enough fabric to cut out all 4 pieces of this: 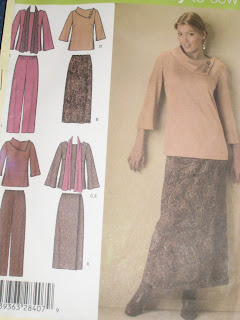 Two shirts, a skirt and the pants.  What would be really CLEVER would be if I also had some more crepe-like fabric in my stash that would GO with the hunter green micro-suede to make this more of a "wardrobe" project instead of looking like I have some weird passion to look like the Jolly Green Giant, but so far my fabric purchasing has been more of the "ooh, shiny!" method versus "this would work well with the clothing I actually already have" sort of process.  Oh well--that could be a future project.  In the meantime, I may have a future promoting green beans and creamed corn............:)

There HAS been knitting, but it's a Surprise Project, so it won't be seen on here for a while.  But keep on the lookout for a jump in the yarn used up tally...........