....that lately a lot of my posts have been about knitting but not so much about MY knitting.  That would be because there has not so much been a lot of "my" knitting happening.  Granted, the dratted yoke pullover is finally done, and when we are back on speaking terms I will have Andy take a picture of us together in what I hope will be a new, warm, loving relationship.  Right now the best I can manage is to NOT give it a raspberry every time I pass it, but then again, I have never really been known for my maturity....

Having learned a few lessons (and a few new swear words) on the ribbed yoke pullover, I decided to do a little pinning and double-checking on the alpaca cardigan BEFORE sewing any seams 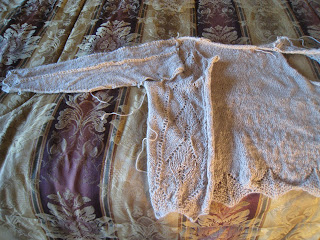 and it's looking good, so when I get some knitting time, I'll be finishing up the second sleeve and MAYBE knocking off another WIP before the end of the month.  The first priority is 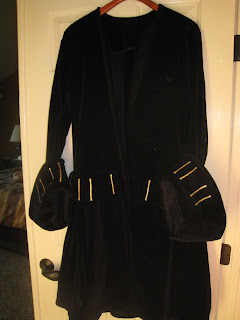 Andy's pirate costume started two years ago and which my very patient husband is hoping to get to wear this year.  (We've been invited to a Halloween party--this isn't a weird pirate-fantasy sort of thing).  I finished the hem, and for the record, a narrow hem is a really, really, REALLY stupid idea when working with velveteen. 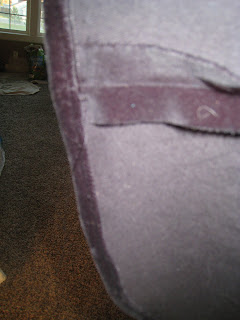 It's really bulky and hard to do--especially since velveteen doesn't like to be ironed.  Moving past THAT lovely episode, Friday will be devoted to adding more braid and adding buttons & button holes--I know, you're all jealous.  If there was a zipper thrown in to the mix, I'd probably cheerfully go cast on another ribbed yoke pullover instead.

Luckily (and frankly, surprisingly) I was able to locate the in-progress pants without much difficulty, so they will be Saturday's project.  There is a vest as well, but we're not talking about that right now....

And when I REALLY need excitement, I drag out 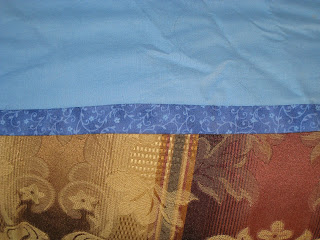 the first bridesmaid's quilt.  I'm still in the slip-stitching abyss of attaching the binding to the back of the quilt, which takes FOREVER.  I'm half done.  I've tried a few different ways of attaching binding, but they just don't look as good, and I figured if it's going to be this late it should at least look like it took 3 years to make.

Even my trusty little sidekick has found this just a bit too boring, and has decided he wants to try his hand at kayaking. 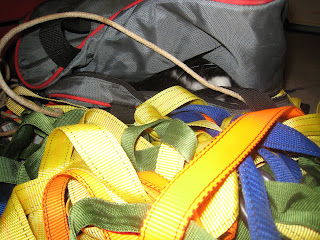 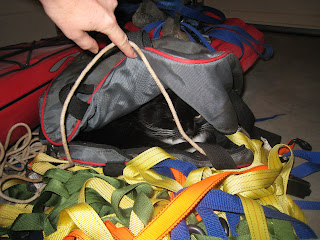 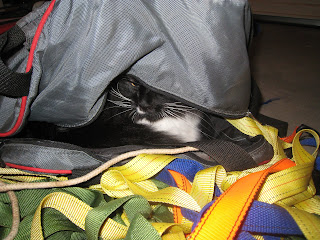