As many of you know, I've been working as a political consultant for the past month, but I have discovered that though my back has made huge amounts of progress, it is not yet ready for full-time work.  So I am taking this week completely off, then will have to cut back any working hours drastically in the future OR be heavily doped.....which is probably bad for the work environment.  (Or good, depending on how one looks at it.)  IN THE MEANTIME, however, I am having a crafting vacation!!!!!

First, I finished up the new baby sweater, 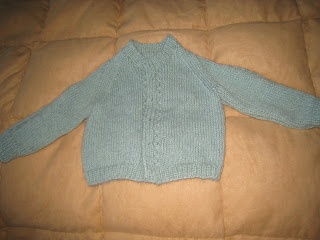 which may be a tiny bit smaller than the first one.  The first one took most of 2 balls of yarn and this one only took 1 and a half.  I don't think the difference could be completely caused by the difference in seams versus knit as one piece, but it works anyway.  It looks a bit wonky because it still needs to be blocked, but I'll get to that.  Probably before I find the darn buttons even.

We have a girl baby coming soon in the family (something along the lines of a first cousin twice removed, but which we will be calling a "niece" for sake of non-weirdness), so I thought I'd do another "baby attitude" quilt but for a girl.  I have a project book where--on the rare occasions that I remember to take notes at all--I keep all my sewing project notes.  I have narrowed its current location down to "one of the sewing room boxes," but decided to try to plunge ahead and start it from memory, as I may not have taken notes anyway.

Since this one is for a girl, I couldn't really use the "Mr. Tibbs" reference, so first order was to do another block......which required 30-40 minutes of trying to figure out what font and size I had used.  In the "really unhelpful" category, the 3D Husqvarna software I have, once you save a design (necessary to do anything with it except edit) it wipes out all details of the design like font used and size.  Of course, I suppose that's nothing compared with the fact that the software CANNOT be used if I ever upgrade my operating system, and Husqvarna will do NOTHING WHATSOEVER to help at that point (surprise, surprise) because they want to sell you the "new" software which is more expensive than my entire machine and existing software was in the first place.  At least this annoyance is free.  Eventually I got it figured out, and I'm thinking of using this for the missing block: 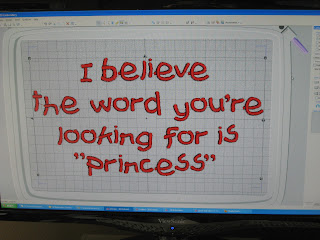 The reason you are seeing it on the computer instead of as a block.....I can't find the fabric or the backing fabric for it.  All packed away.  Seriously, when the shelves are finished, I am going to be happier cleaning up the house than I ever dreamed possible.  But at least this part is done.

I want to do some sewing this week, but thanks to the new job, sitting is back to being difficult and painful, so it may not happen.  If it does, I'm sort of limited to the project category called "What I can find."  So this 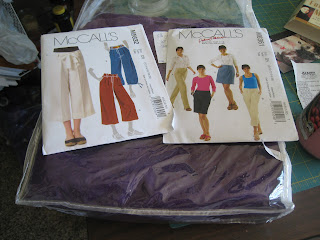 is the current front runner.  I have 5-6 yards of a purple twill with a tiny bit of stretch, and I'm thinking of the white pants on the left and the tan pants and skirt on the right.  Can one ever have too much purple clothing? There seems to be something in the air, because I have been really flirting with this: 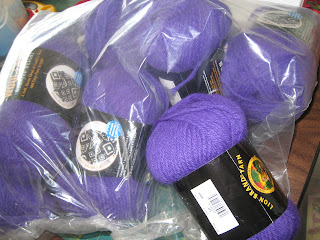 which Andy says is too purple for him to ever wear (note to self:  quit buying any yarns except olive green, black, or dark blue if I think my husband is EVER going to be seen wearing it), so it has been lurking in the closet waiting for attention.  Lately I've been wishing I had something REALLY simple on the needles, like a sock or garter stitch ANYTHING, and now I'm completely obsessed with the idea of making Elizabeth Zimmermann's Epaulet jacket.  I've been wanting to try it since I first read about it several years ago because she does all sorts of interesting shaping, and I even have the needles ready to go 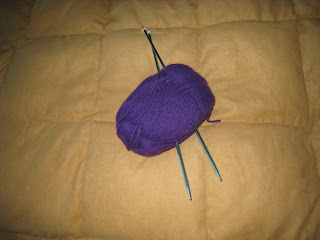 but managed to hold myself at bay for an extra day by digging out the mohair sweater and getting several inches added to the fronts: 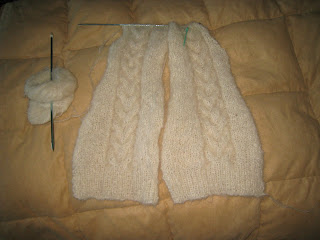 to get myself closer to finishing what was supposed to be the January sweater.  I did 4 cable twists rows yesterday, so that makes at least 6-7 inches and the armhole shaping is all done.  I edited this pattern a bit because I was afraid I would run out of yarn because I had a little less than it called for, but I'm done with the back, the fronts are almost done, and I'm still not through 4 skeins of yarn out of 10.  The sleeves will take more than the fronts, and there's a shawl collar, but I think I could have skipped the adjustments.  Oh well.  I think it will be a fun jacket, but I remember why I've needed breaks from this sweater.  The pattern is fine--the mohair is the problem.  I don't know why I am so fascinated with mohair--you'd think I'd have learned my lesson by now.  But, no.  I have more of it in my stash and am even crazy enough to be excited about the sweater I'll be making with it.  Slow, slow learner.

When I needed a break from grabby yarn, the nice little scarf was around to get some attention: 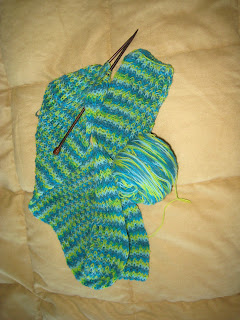 and is making great progress.  I think I'm more than half done already.  But I don't expect to hold out all week against that purple yarn....it's Elizabeth Zimmermann, after all.  The goddess of knitting PLUS a knitter with the attention span of a gnat.  What chance do I really have???