Pilfering the folding table we generally use downstairs when we have parties,  I set up the U-arrangement I'm thinking would work: 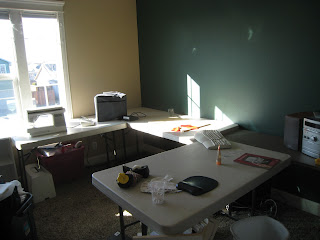 or would if this were actual furniture and not plastic tables.  Picture the card table with the stereo on it actually being just part of the actual desk.  I thought it would be great to be able to sew while looking out the window, which works really well for the first part of the day, but by afternoon: 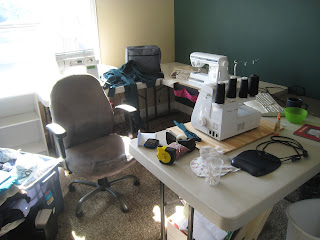 Um, yeah.  These are indeed southern-facing windows.  How did you guess?  New plan:  the embroidery machine can go on that table.  But, I do think this will be a fantastic layout if I can figure out how to get 4 machines and a computer all set up around it.  For the eventual actual furniture, Andy will make the desk, and we can make most of them a bit narrower so it doesn't eat up as much space.

Trying to do a test-run was a bit interesting as I haven't the faintest idea where anything actually is--except the serger thread which is in my bedroom closet and the sad looking ivy plant, which is in the guest bathroom.  However, I did finally locate a WIP that I probably started back in 2004, as it's one of the very first sewing projects I attempted and DEFINITELY my first sewing projects banished to the project time-out bin, where it was sent for the crime of being over my head at the time.  Today I got to spend a fair bit of time ripping out the seams which were A. totally and completely wrong, and B. the reason for the banishment, but thankfully I still think it's a cute project 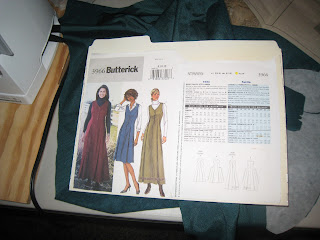 and have nothing else to sew anyway.  So it's really cute.   I am really annoyed that I packed up the wrist pincushion I always wear, but so far have remembered not to stab myself in the wrist.  The hardships we crafters suffer for our crafts.............:)  I'm doing the pleat insets now, and after that I think everything is pretty much done except for the buttonholes and hem and one or two seams.  Thankfully it doesn't require a zipper--I think they might be in the garage.  Or maybe Andy's closet.......