The One Day Window, or A Tale of Four Companies

After a year of not buying any yarn, I allowed myself certain purchases on January 1:

1. A reward sweater from me for the whole cat ordeal
2. A birthday sweater for Andy
3. a shawl for my mother as her retirement present
4. yarn to finish a pink blanket for one of my nieces.

That was the plan. To achieve this was going to take 4 different online orders.

1. WEBS. The yarn I wanted was on back order, but I placed the order anyway. I also ordered a #9 circular needle because I really dislike the one I have. The same day, I received a confirmation from them, then the following day I received a personal email from them telling me the yarn was on back order, but they would process the rest of my order ASAP, then I received another email shortly after saying it had shipped, and I am currently in possession of my new circular needle, and looking forward to the yarn whenever it arrives. Great service as usual, but no yarn yet.

2. Elann.com. The yarn I wanted for Andy's sweater is temporarily out of stock (just the one color), but they will email me when there is more. I love these guys--aside from the fact that they have done more to grow my stash than anyone else. So, that order is still to be placed and will arrive at my house about 3 days after I order it. I love these guys! I know there will be good service, but no yarn yet.

3. Knitpicks. The yarn for the shawl (and my unfortunate run-in with a discontinued lace yarn that I loved) were shipped a few days ago and will be arriving whenever SmartPost decides to hand it over. Not quite as fast or as customer-driven as Elann or WEBS, but still a great place to do business and the one ball of yarn I ever had to replace was replaced without question and because it was defective, I think they even paid the shipping. Really a good company, but no yarn yet.

4. Joanns. They are building a Joanns Superstore here, which seems to be replacing 2 smaller stores because they haven't been restocking them, and I needed fusible thread and the yarn, so I placed an online order the same day as all the others, and few in a few extra things that I was out of that are hard to find. As of yesterday, the online status was still "processing" and repeated attempts to reach them for an answer failed. Last night--after sending 3 emails to customer service--the status was finally changed to "shipped." No exceptions--just "shipped." This morning I received an email from them saying the yarn and the fusible thread were out of stock and they had not sent them. On the 9th day. This is after the thread, which was supposed to be 50% off in stores and on line but wasn't, it wouldn't honor any of their coupons because I wanted to use the free shipping promotion and they only allow one promotion no matter how large the order, they hadn't responded to any attempts to reach them, AND they won't allow online orders to be cancelled. Want to place bets on whether or not they honored the free shipping as without the yarn and the thread the order dropped below the dollar amount required? I have rarely been so disgusted with a company, and will never be ordering from them again. Truly lousy service, and no yarn!

So, the long and the short of it is, after one YEAR of not buying yarn, I had my one day to buy yarn and STILL don't have any new yarn!!! ARGGGHHHHHH!!!

I'll be making a trip out to pick up the yarn for the blanket, as her birthday is at the first part of March and time is of the essence. I've used up one skein on it already, 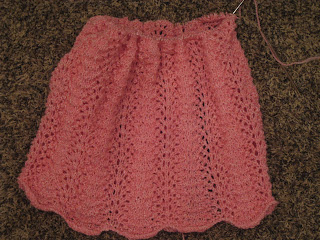 and think I'll use two more, which is quite a bit of knitting. 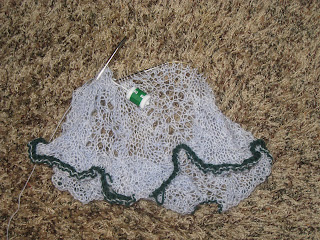 though it's looking very ramen-noodley right now. That's one of the big problems with lace--it looks terrible while you're knitting and you just have to keep faith that it will look like something at the end.

And......the first day of physical therapy was a great success! Theo did the water tank, and actually walked on his bad leg in the tank (the buoyancy makes it far less painful), and he's already regained some range of motion. 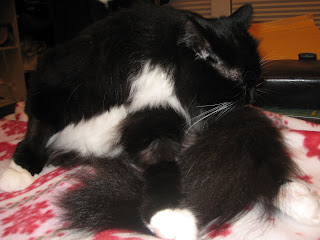 He spent last night licking himself like crazy, but the difference in him so far is amazing. He's less frightened, less whiny, and he's putting a little more weight on the leg when he stands. They gave me some anti-inflammatory steroids for him as his ankle is a bit swollen after being so inactive for so long, but it has already made a huge difference. The doctor was astounded--usually they don't even turn the treadmill on in the water tank on the first appointment, and cats often won't do it, but he's quite the champ. I think his leg looks a little less "chickeny" already: 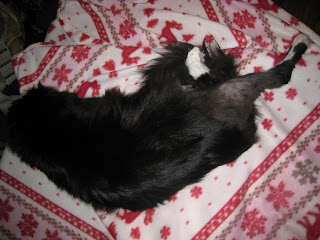 And Callisto had such high hopes that we had finally given away Theo that she spent the day as sewing kitty: 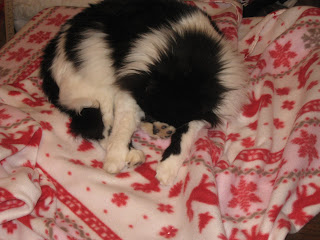 She really isn't a very nice cat most of the time, but she is still pretty cute. We've been taking turns sleeping in the guest room with her since Theo has the master bedroom, which has helped her disposition a great deal. Could it be any more obvious that the felines rule this house?