Nobody Is Very Happy Today

Well, we're back to this: 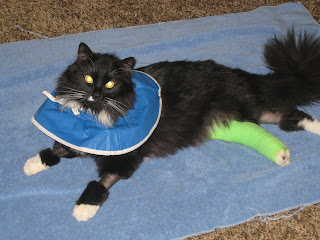 Theo now knows that casts can be removed--though he's managed to not draw any useful lessons from the severe pain that results from pulling casts off--so we've had to resort to kitty satellite as well as the drugs. We have 2 days of kitty pain medication--which knocks him out nicely but has to be applied to his gums rather than just forcing him to swallow it. I had never noticed before, but cats really have very small gums and they're not generally fond of exposing them--except to bite someone who is really irritating them. After that, we have kitty Valium, which thank heavens is in pill form. Not as easy as the liquid oral medicines, but too many more days of the gums sort of medication and Theo would not be the one getting the valium.

Full-time kitty patrol has at least allowed me to make some progress on dem fischer sin fru: 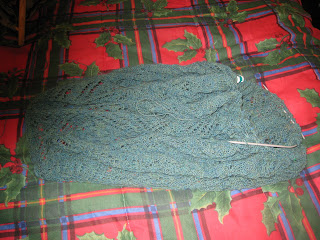 and I'm just about to finish with clue 3. I don't know if I'll be able to get back to Fleur. The cuffs require more beads to be threaded onto the yarn, and kitty-monitoring knitting has to be able to be put down at a moment's notice and I need my full attention when attempting to work with beads. Still, maybe the Valium days will give me more free time.

Andy is kitty-sitting tonight, so I got time to work on the Christmas stockings. Everything is embroidered, including: 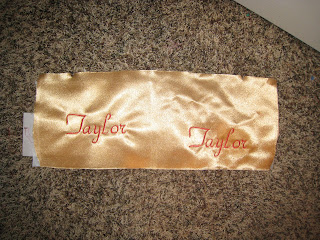 I'm not just being really thorough on the cuffs. I forgot to check which way the last red stocking would slant, so I initially put the name on the wrong side--and a bit too low. Since it will be the back of the stocking, I'm just going to leave it. Ripping out a name would show on the satin, and even I'm not picky enough to care what is on the back. I still need to cut out a few pieces, but much of the batting is basted in place, the linings are all stitched together, and three stocking shells are stitched together. I'd like to finish up at least part of them this weekend, as they need to be mailed. Maybe I can just include a picture of Theo with any gifts that are late--doesn't that count as a really good excuse?????