I Have A Cold

So I've been sleeping a lot.  Admittedly, I'm probably really babying this cold, but as the last cold I had turned into a 6-week saga ending in a bad case of bronchitis and massive amounts of drugs, I'm a bit nervous about colds now.  I didn't actually know they could get that nasty.  So, I've been sleeping, reading, and knitting, so there is a finished scarf 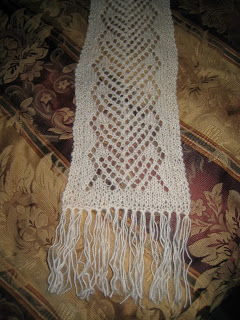 progress on a few WIPs, and then some new socks to thoroughly demonstrate my lack of attention span 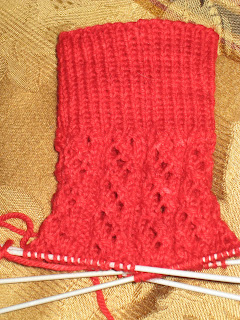 (as if anyone actually suspected I had one).  A bit of a bad picture, but this is a variation of the pattern I used for the Sunshine socks, called the oblique openwork pattern from Sensational Knitted Socks.   I had intended to use a different pattern, but I thought it best not to get too creative while under the influence of Nyquil.

Over the weekend (before the cold hit) I finished two more mittens for the mitten garland, 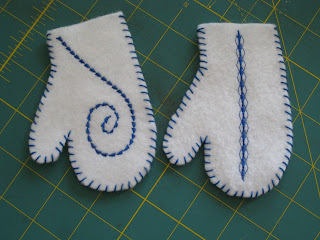 taking advantage of all my new decorative stitching options, and then spent most of my crafting time playing around with some ideas for Christmas decorations: 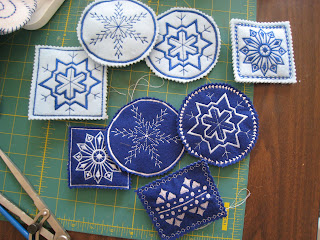 They're made of felt, and I'm doing the embroidery on large pieces of felt, then adding a backing and a little batting, then doing the decorative stitching around the outside before cutting them out with pinking sheers.  I'm pleased with most of the results....Bernie having eaten a dark blue one before I realized that this sort of thing may not be Bernie's forte.   So, these are a joint venture between the two Husqvarnas.  I'm counting a set of 4 as a finished project, so voila!  Two more projects down....21 more to go.  Yikes!