SOME Of Us Had A Good Day Yesterday...

Bright and early, Andy made me some new table legs: 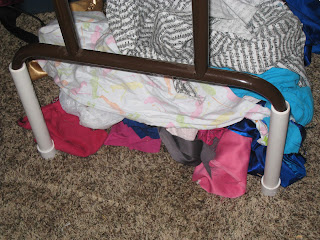 There's a wooden dowel inside the pipes to give it some additional strength.  The table is now 36 inches tall, and I love it!  It's a bit less stable than it was before, but not much.  So I spent much of the day straightening the sewing room, getting the final place mat and the batting cut out, and even got a bit of sewing done. 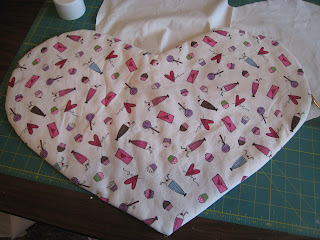 I think I'll do some sort of decorative stitching to keep the batting in place, but I think they'll be quite fun.  I even tried the coasters: 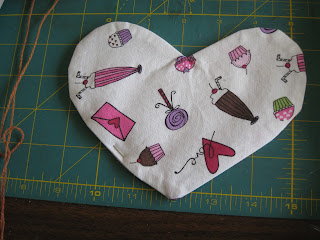 and after figuring out that a half-inch seam allowance was more appropriate for making a small heart ornament, I think I got everything figured out.

I had the good day.

Theo, on the other hand, had a rather bad day.  The sewing room table is one of his favorite spots to hang out, and where I keep his water glass: 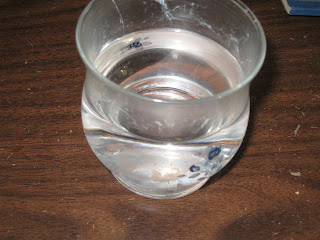 He has a water bowl, of course, but only uncultured kitties drink out of a bowl, and giving him his own glass was the only way I have come up with to prevent unwittingly sharing my own water with Theo.

I'm not positive if Theo can't actually jump all the way onto the table now, or if he just happened to jump and catch the place mats rather than the table, but last night I heard a crash and found a very indignant kitty and some half-done place mats on the sewing room floor.  Wanting to make amends, I lifted him onto the table and had a little grovel-petting time.  I think all would have been fine, but he decided to get a drink.  Apparently the impact of the kitty meeting table was enough to splash water out of his glass.  This wouldn't have been a problem if there hadn't been some leftover water-soluble stabilizer near the glass.  As I've only seen it in solid form or washed away, I hadn't yet encountered the in-between stage, which is a gummy-sticky mess which sticks to cat fur really well.  Thankfully, it only reached his front paws, but Theo got to round off his night with the indignity of having his paws washed in the sink until all the stabilizer washed away.  The poor little guy.  Needless to say, Theo did not sleep with me last night.  I think there's a bit more groveling to be done.......