It All Started Here: 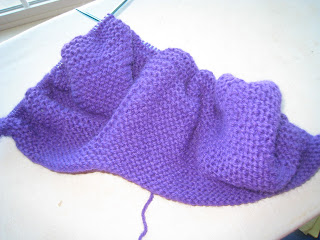 This is my EZ's Epaulet Sweater.  It would actually be farther along by now if I hadn't been dumb enough to treat this like any other sweater.  Most top-down sweaters will have increases on BOTH sides of the markers for the sleeves if they have markers for the sleeves.  This is called "raglan" and is a sweater style that those of us who weren't Elizabeth Zimmerman use to make sweaters.  But the reason I am making this particular sweater is to learn her shaping technique for this particular sweater.  It starts with a long skinny band of garter, then you knit a rectangle just on the center stitches, then you pick up stitches on one side of that rectangle and knit another rectangle, then repeat on the other side, and then shape that skinny band into the neck band.  (Thank heavens there is a chart in the book for this--otherwise I would be writing this from a corner in the back of my closet surrounded by frogged and tear-soaked purple yarn).  Now this is not normal shaping, so the fact that I did several rows of increases on BOTH sides of the markers means I am an idiot.  Why, after encountering the Baby Surprise Jacket, 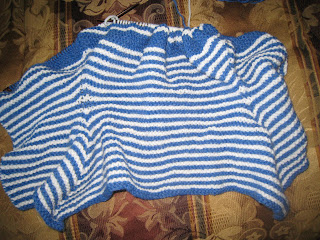 would I not realize that she doesn't do anything the "normal" way?  It would be like being surprised that she's using garter stitch or that I would have a sidekick while crafting. 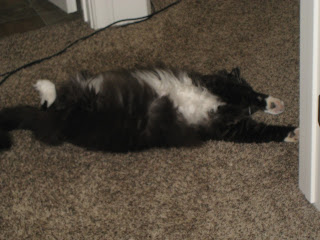 I had no choice but to tink several rows--not all of them, though, since I thought I could probably live with a few extra stitches--as frogging is out of the question for this sweater.  I don't even want to imagine the horror of trying to figure out where I was in the pattern and turning and picking up stitches and trying to figure out what I was dropping and picking up--it would have left me flattened out right beside Theo.  Had I followed the pattern closer, I think I might have already used up the first ball of yarn: 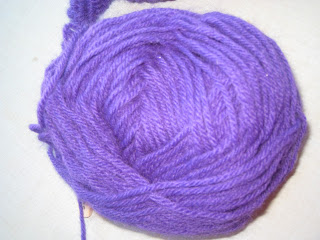 which is my big driving force right now.  What if I beat my best year's yardage?  This is how Type A people knit.  Or type A people who have been schlepping their yarn around the house for three months.

The sweater is getting enough stitches that I thought it was time to switch to a circular, but the only circulars I could find were shorter than the combination of my 2 straight needles, which would have made the problem worse.  There was a weak moment when I started looking at needles online, but then I thought, "Wait!  These are size 7s--there is NO way I don't have more circular options," which led to a one hour sorting and inventory process on Ravelry of my circulars and DPNs, and: 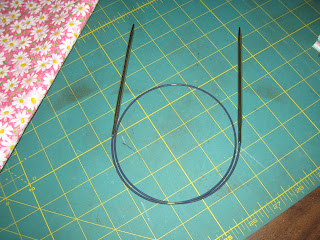 a longer circular!  It's not as long as I had hoped, but I think it will get me through the longest rows if I squish a lot, and it will keep my Visa and me off yarn store websites.

I had never thought to put my needles on the Ravelry inventory page as I didn't really see the point--or was afraid of the results...one of those two--but I think this will help me keep straight if I need to be looking through projects for needles or if I truly don't have the needle size.  I didn't figure out everything--I'm not clear exactly on how many sets of my favorite size 1 dpns I actually have, but it's at least 3 maybe 4, but they're not a brand I see all the time any more and they are my absolute favorites (Susan Bates Quicksilver) for socks, so knowing I have 3 or 4 sets probably won't deter me from getting another set or two in the future.  I have some wooden sock needles, but I don't ever use them.  I love wooden needles in general, but size 1 wooden needles just scare me.  They're slightly thinner than toothpicks or bamboo skewers, and how many of those have I broken, and they aren't $15-$30 a pop.  I will save them for lace when the need for less slippery needles overrides my fear of breaking them--just as soon as I'm dumb enough to knit lace on size ONE needles.......................