We Have Baby Quail!

Friday when I got home from work, I found a family of quail in our front yard, and as I was trying in my COMPLETELY unstealthy way to not frighten them, 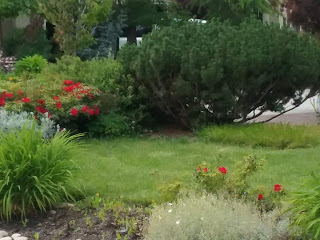 I frightened them into the bushes.  Wildlife photographers everywhere remain completely unthreatened by my prowess.  I spent a fair bit of Friday afternoon out watching to see if they'd decide to come back out--doing some weeding as a cover, just in case my neighbors would worry about shrub-watching as a new hobby or something--but I haven't seen them again. But they were adorable.

Yesterday was surprisingly chilly, so aside from some yardwork and a few chores, Venus and I worked on the quilt: 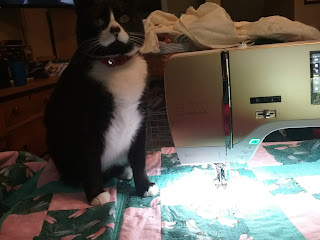 Thanks to a thread-cutting button, I'm sewing rows of stitching on the larger dragonfly print blocks in long rows, and I'm just over half done on the second row of blocks--there are a total of 8.  So it's a long process, but it's a good after-work project as it's just the same thing over and over.  Slow is better than never, right?

I had meant to curl up in bed a bit early last night, but someone else had the same idea. 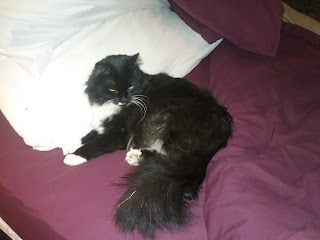 I guess it really was THAT sort of evening.  He doesn't believe in sharing when he's the one who will be doing the sharing, but he does believe in getting up when cat treats are being offered in the laundry room.....