Hope Everyone Had A Lovely Thanksgiving

We had a lovely Thanksgiving.  Last year had been the first Thanksgiving we've really hosted, and we were able to have a friend over who had missed the last few Thanksgivings with health problems.  We lost him this summer, and he was absolutely one of my favorite people, but his widow and some of the family were able to join us and my parents came down, and I think it was as nice a day as it could have been for our first holiday without him. 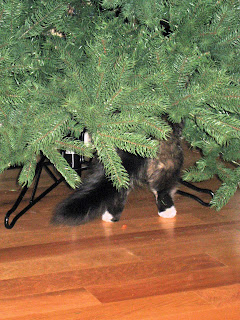 with LOTS of kitty help.  We got Valentino right before Christmas last year, but he wasn't here for the decorating, which is entirely fascinating for kitties--as is embroidery: 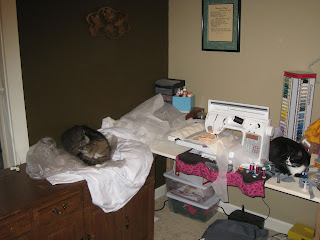 We have 9 Christmas parties on the calendar so far, so 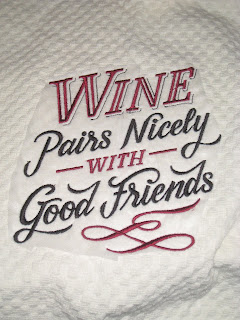 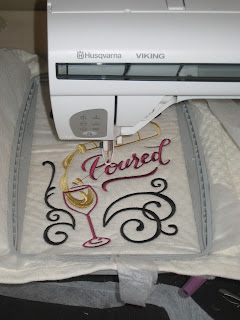 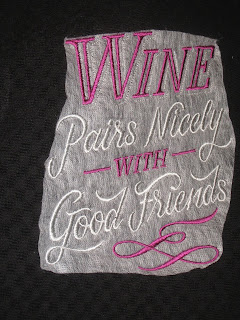 I might not be as far ahead with hostess gifts as I thought I might be.  This weekend I'm also hoping to get started on some spicy spiral runners.  One of my closest friends is turning 50 shortly, so I wanted to do something special for her, and this seemed a good fit. 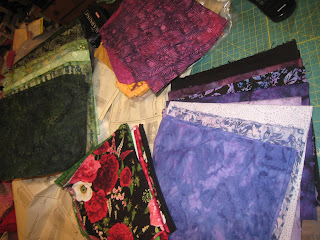 Having handmade-gift-worthy people in one's life is REALLY a good thing--it's just that sometimes life gets in the way.  And sometimes it's time to place some limits. One of my favorite Christmas traditions is a girls' gift exchange that a friend of mine started several years ago.  She said there was a year when a few of them weren't in very good places in relationships and she thought it would be nice to start a gift exchange so that, no matter what was happening in the rest of their lives, there was a moment when each woman knew someone was thinking about them.  Isn't that the loveliest idea ever?  Unfortunately, over the last several years, rather than just opting out if they didn't want to participate, two people on the list have started complaining about it, and will only participate if we make the gifts handmade ONLY.  I'm as big a fan of homemade gifts as anyone, and it isn't like people aren't free to give handmade gifts (I usually do, but sometimes I don't have time) or that they aren't always welcome, but I can't imagine what kind of ego it takes to insist that the only gifts anyone can give to anyone else must be a certain way.  Maybe it's just me, but I think that misses ANY point of gift-giving, plus I'm not even sure if everyone on the list DOES make things as we're not a craft group, and it's really short notice even if this were vaguely appropriate to require.  Going through this each year has kind of tarnished this particular get-together for me, so I've decided this year to keep what I love about it alive by focusing on people outside of this group who are maybe in a rough patch in their lives and could use someone thinking about them during the holidays.  Can you think of a nicer reason to make something?

Speaking of crafting, I've made progress on the dragonfly quilt, 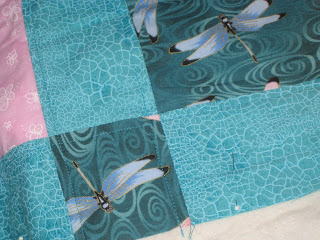 and while I was originally trying to figure out a great free motion quilting design for this, I'm still new to FMQ and  thought maybe in the interest of finishing this EVER, accent quilting could also be nice.  All the lines on the sashing strips are done in both direction without a single pucker on the back, so I've still accomplished something REALLY new to me.  And I need some practice on FMQ on scraps first--like maybe gift bags? 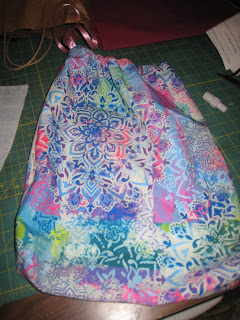 I did make myself a new project bag a while ago, 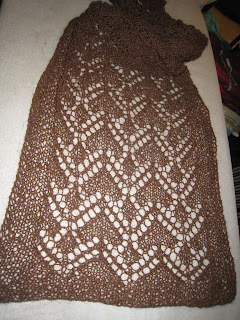 and have almost finished a birthday gift scarf for next year.  I also might have purchased some grey yarn to make the Irish Moss sweater that I've always wanted to make: 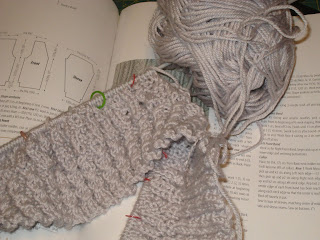 and I'm in love.  I promise, I am still doing seams on the other sweater, and might even have it done later this weekend, 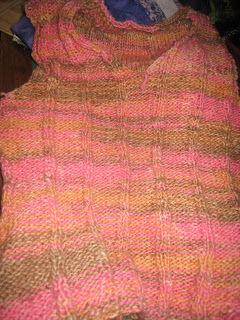 but I am just not a monogamous knitter. Which is okay--the scarf is too dark to work on in some light, I have a sweater for stoplight knitting, and Irish Moss lives in the sewing room for when I need to rest my back a bit.  But I am back into knitting! This is probably more knitting than I've done in the last several years.  It's good to be back!