We Have Hit A Snag

For the green vest, I selected this pattern 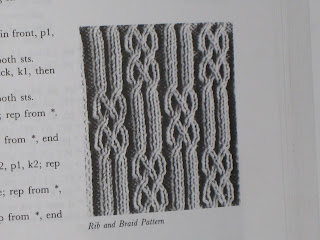 for an overall cable and rib look.  I decided since there was some variety to the cables, I didn't need other patterns involved.

Since I'm making this up as I go along, I diligently swatched, and got 4.5 stitches per inch with the size 8 needles I'm using for the body.  I thought I'd aim for a 43-inch circumference, as the future recipient might be just a shade larger than Andy, and Andy's last sweater I made for a 42-inch circumference.  4.5 x 43 = 193.5 stitches.  Adding a 10% ease for a cabled pattern and working into the 18-stitch pattern requirement, I originally decided to cast on 216 stitches.  THEN I started measuring and second-guessing myself, and thought that maybe 10% wasn't enough ease for such a scrunchy pattern, so I then decided to cast on 234.  In the ribbed part, the gauge is 6 stitches per inch.  That made me a bit nervous as 234 divided by 6 = 39 inches in circumference.  Hmmmmm.  So I decided to add another 18 stitches, and now have 252 stitches: 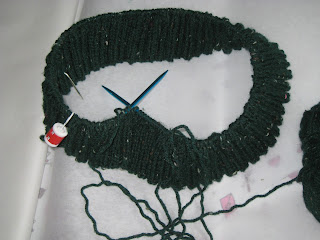 Did anyone else scoff ever so slightly at Elizabeth Zimmermann's suggestion to make a swatch cap when they first read it?  The Knitting Gods do not like those who scoff at EZ, the goddess of knitting.  I actually don't think I have enough yarn to have made a cap and a vest, but now I think my only option is to keep going now that I've started the actual pattern, then slide the stitches onto a thread in a couple inches and measure.  This could be anything between 56 and 42 inches in the round, but I'm thinking I have done something to land in the middle, and should have left that final 18 stitches off. 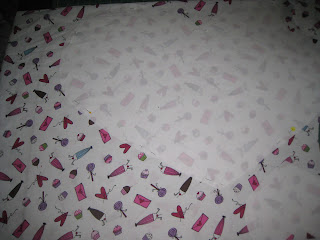 when the going gets tough, the tough get a new project.  Meet the Valentine's Day place mats.   I think with a half-inch seam they will be generally place mat-size.  I was tempted to make them rectangular so I could get two sets out of the fabric, but the hearts are such fun and I'm cutting out smaller hearts to make coasters for gifts, so I'll still have a few gifts.  It will be slow going with the back, and one of my resolutions this year is to get a taller cutting table for the sewing room.  I haven't quite resolved on what sort of table--folding, storage underneath, moveable, not moveable--but maybe after we get the permanent shelving on one wall, I'll have a better idea what I want.  And, of course, if the stash were smaller.........