And the first of TWELVE sweaters is almost finished: 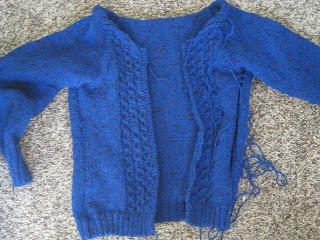 and, being me, I still think 12 sweaters/shawls entirely doable.  Probably not too surprising, because I also seem to be able to believe that chocolate chip cookie DOUGH has no calories, even if the cookies do.  My world is a fun place.

Now that the sewing room is under attack an organizational-spree, we thought it would be a good time to rehang the closet doors: 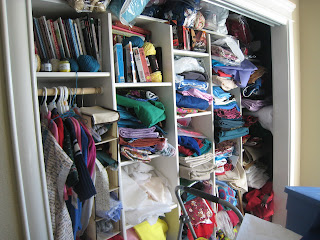 which would have been a FANTASTIC thing to remember before packing up all the shelves.  The screws, I can locate.  The metal sliding parts.........not so much.  They are in a plastic baggie, but where that baggie now IS would be anyone's guess.  "A box" is as close as I can come.  So......maybe later.