So in the interest of wearing more of my me-mades, this year I decided that every Monday didn't have to be a different me-made item.  Last year I found myself wearing fewer hand-made items the rest of the week to try to "save" them for Mondays (which probably says sad things about my enthusiasm for doing laundry).  Yesterday I had a doctor's appointment, and since we have been housebound quite a bit this winter, I celebrated being out by wearing the blue microsuede ensemble 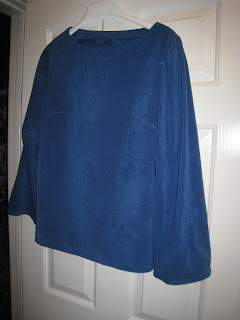 AND a blue bowknot scarf that has apparently never gotten a "finished" picture.  It felt so festive!

And I learned a very important lesson: If you are trapped in a waiting room for an hour with some "Discovery" Channel show about hillbillies making moonshine (and boasting about not knowing what they're doing), the actual exam is NOT the worst part of the annual "woman's wellness" exam.  Heavens.  I like my doctor, who is a very educated man who probably still assumes that the Discovery Channel has something to do with science, but it was a LOOONNNGG hour.

I stopped at the library, went out to lunch, stopped for groceries, and almost didn't make it home before the next snowstorm hit.  At least for us, this one was fierce but turned to rain so there was little shoveling, but other areas were not so lucky.  Today snow collapsed the roof of the closest grocery store to my hometown, and our local ski resort received 20 inches of new snow in a day.  It was so cute last year when we were excited that the mountains had enough snow for cross-country skiing.  I know there's more snow predicted, but I have turned off the weather app on my phone until it decides to say nicer things. It's 2017 and facts no longer matter, right?