I had decided early in the week to make today a crafting day--meaning no gardening or cleaning or anything that "had" to be done--and had a long list, starting with embroidering some towels.

About a week ago I found kitchen towel packs on sale at Shopko (and tablecloths on clearance for $2.99 each, which has nothing at all to do with this story but SCORE!!!!) and they were ones I could embroider on, so I stocked up. As you may have guessed, we're pretty social people and always need hostess gifts or prizes of some sort, so I set up my sewing machine to embroider, thinking I would knit while the machine worked....

....and promptly scalded my right hand while making lunch. Nothing serious--not even enough to cause blistering, but enough to render me with only a left hand for the day. (The soup, by the way, turned out quite well, but I still wouldn't say that it was worth it.) So, no knitting, but 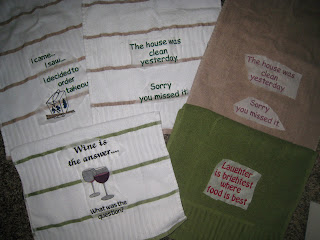 and one more in the machine as I write. The white stuff is a water-soluble stabilizer that will wash out in the laundry but keep the stitches from sinking in to the terry cloth loops. I cut off the excess to keep for blocking any knitted lace I want a bit stiff. It's really great stuff. I keep thinking I'll dissolve some in a bottle of water and use it as a spray starch for ironing, but I try to avoid all activities that encourage ironing in general, so it hasn't happened.

I won't make it through all the towels tonight--and frankly, I'll want to save a few projects like this for next year's 100 project challenge, but I'll have to decide a fair way to count them. I don't think one towel should count as one project, but 30 towels shouldn't be one project either. Maybe every 2? Every 3? Or maybe it should be based on the number of thread changes, as that takes SO much more time......Decisions. Decisions.