A Little Lighter On the Sudafed

It took a few hours to feel like doing anything yesterday, but once the Sudafed kicked in, I cleaned like a maniac. After four years of dealing with a bad back/hip, lots of things had been neglected, so the house needed it.  However, I had to be a bit more sparing in my Sudafed use today, because it's just a bit much for me.  I was finally calm enough to use my wooden knitting needles without starting a fire Boy-Scout-style, so 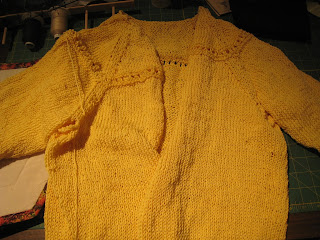 the body of Sitcom Chic is done!  The sleeves were joined raglan-style, so the only seams are the underarms, which is nice.  Next will be to pick up the front edgings, so it's really close to being done.....and it's about where it would get set aside for a faster, easier project if I didn't need 20 finished items to wear this year.  If you can't overcome your weaknesses, at least find a way to work around them.

I was even calm enough to finish this: 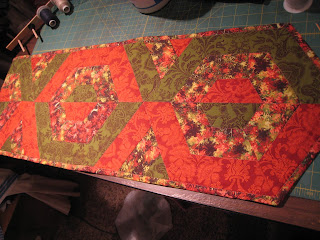 which was surprising.  I used a simple thin zig-zag and my walking foot for a bit of quilting with a variegated thread: 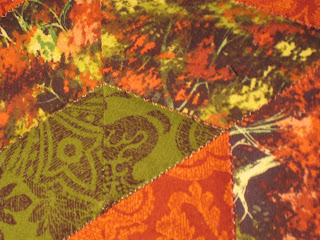 which is barely visible here.  Only one pucker on the back, which is a new record for me.  I don't actually like orange very much, but other people do, so I'm hoping someone will appreciate it as a gift.  I had an apartment once with 70s-orange carpet AND counters AND linoleum, so I come by my dislike quite easily.  The 1970s have a lot to answer for in so many ways...........