I Went Cross-Country Skiing and Can Still Walk! 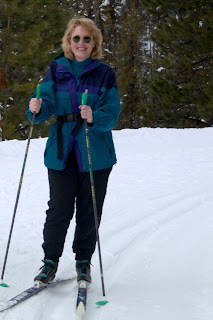 which we honestly weren't sure I'd ever be able to do again.  We did regular Nordic, where the motion is completely straight ahead using a track, which is actually a terrific motion for my hip, and which I've been practicing in the pool for years now in hopes that I could do this.  Even though it's February, the snow conditions were a bit more spring-like than I'd counted on, so I walked down some of the hills, but it was fantastic, all the same.  The trail is 5-6 miles, so I was exhausted by the time we got home, but my legs weren't.  In fact, Andy and I went for a 3-mile walk yesterday just to loosen up the muscles.  I had prepared myself for spending Sunday in bed on the heating pad, but I really felt fine except for being a bit sleepy as I didn't sleep very well.  So, with the money I'm saving by NOT buying from Nancy's Notions, I ordered snow shoes last week and we're going to try them out Saturday.  I'm less of a snowshoeing fan, but it's an easier sport and many of our friends snowshoe, so I want to be able to play along.  I'm so excited I could do this!!!!!!!  I used to cross-country ski a great deal, but between life, warm winters,  and the hip issues, it had been 10 years since I last went, and I don't even hurt as much as I would have expected for a first outing of the season--hip problems or not.  YAY!!!!!!!!!!!!!!

I thought I'd be knitting all day on Sunday while I whimpered in pain, but 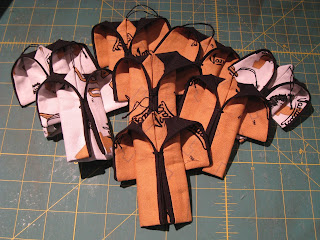 instead I made 8 kimono ornaments with my college fabrics.  The white print doesn't work as well as the gold for anything so far, but the gold looks nice.  Still, no one would really want a quilt of these fabrics....right????

After the frustration of the Cupcake Incident, I buckled down and finished the corduroy jacket on Friday: 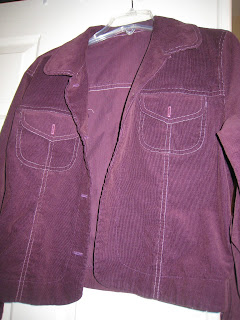 The top stitching looks wonky, the thread on the front buttonholes is a different color than that on the pockets, the back puckered when I sewed on the facing, the sleeve cuffs still aren't quite straight--basically nothing really went right on this jacket.  I haven't added buttons yet, having decided to wash and dry it first to see if the sleeves would straighten out a bit (which they sort of did).  Oh well.  It's done, I'm not very happy with it, but who knows--maybe after the trauma subsides (and my eyesight gets steadily worse), I'll decide that this really is a nice jacket and wear it a lot.  It could happen.  In fact, 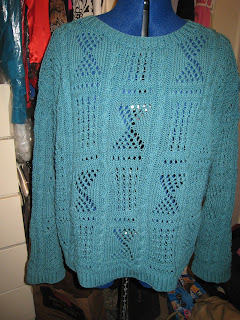 today's sweater for Me Made Mondays is one of my bigger sweater disasters, and yet it's one of my favorites anyway.  I checked gauge, but I don't find that cotton particularly cares one way or the other about such things, so the sweater ended up as a giant monstrosity, which I can ONLY wear because I made the neckband much smaller and tighter than it called for.  The sleeves are too long, the sweater is huge, and I still wear it around the house all the time.  It's SO soft and comfortable.  Had I known that it was going to be this huge, I would have made it about 6-10 inches longer to be a full-on tunic, but that's the thing with cotton--one never knows until much later what it's REALLY going to be like.