........and my order with Jo-Ann Fabrics is still "processing."  I wouldn't mind quite so much, but I've dealt with Jo-Ann Fabrics before and the odds of them being out of the things I've ordered when they screw so long with shipping is about 99%.  So, I'm not even sure I'll get the paints I am so anxiously awaiting.  I want the next spending ban to start on January 1, so I'm hoping they can be bothered to send whatever is left at least by December 31 so I'll have a chance to find replacements for the things that they no longer have.  Bastards.

Luckily, everything else is going much better than dealing with Jo-Ann's.  Yesterday I had physical therapy first thing, and I have a glowing progress report to take to the physiatrist on Monday.  I'm still continuing the weekly therapy as I still have a long way to go, but for the first time in 2 years, I can sometimes forget about my back.

After therapy, in spite of the cold (we might get above freezing tomorrow), I ran errands.  LOTS of errands.  IN THE COLD.  For the last 2 years, cold temperatures caused my back muscles to seize up entirely.  This year I can function.  And, of course, I'm getting to wear lots and lots of hand-knits because it has been brutally cold here this week.  Not as bad as January, but we did get down to -6, and yesterday was sunny and eventually hit 23 degrees, which comparatively felt great.  I did extra laps in stores to get exercise in that didn't involve ice, and by afternoon could even walk around parking lots and bare sidewalks in a few places.  It was exhilarating.........especially since I didn't need any muscle relaxers at all to do it.  YAY!!!!!!!!!!!!

Feeling good, I came home and did a little crafting, 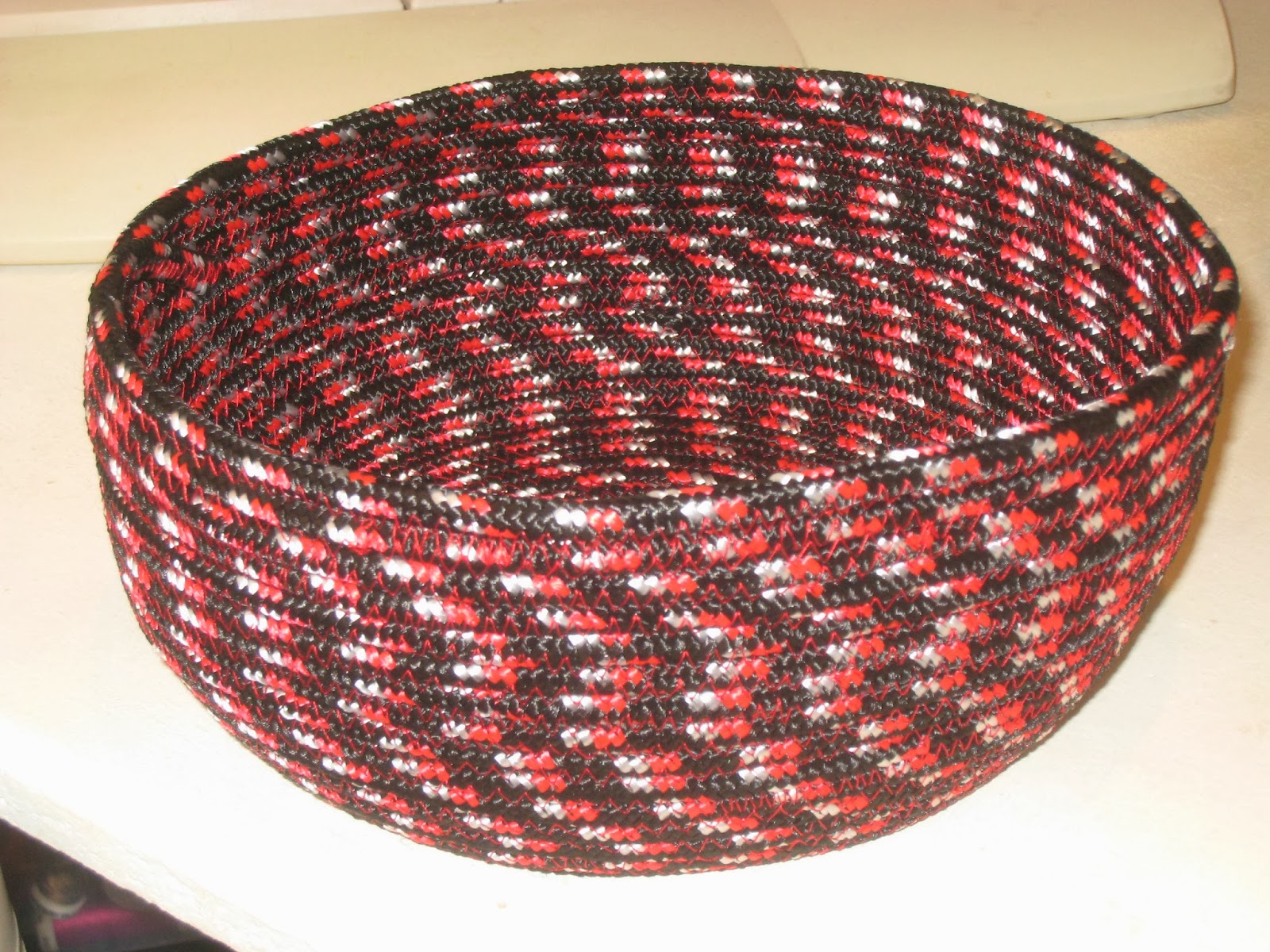 making my first bowl on the Bernina,  which Andy said looks like a fez.  Someone is asking for a lump of coal, I think.  Undeterred (and without asking for further opinion, obviously), I made 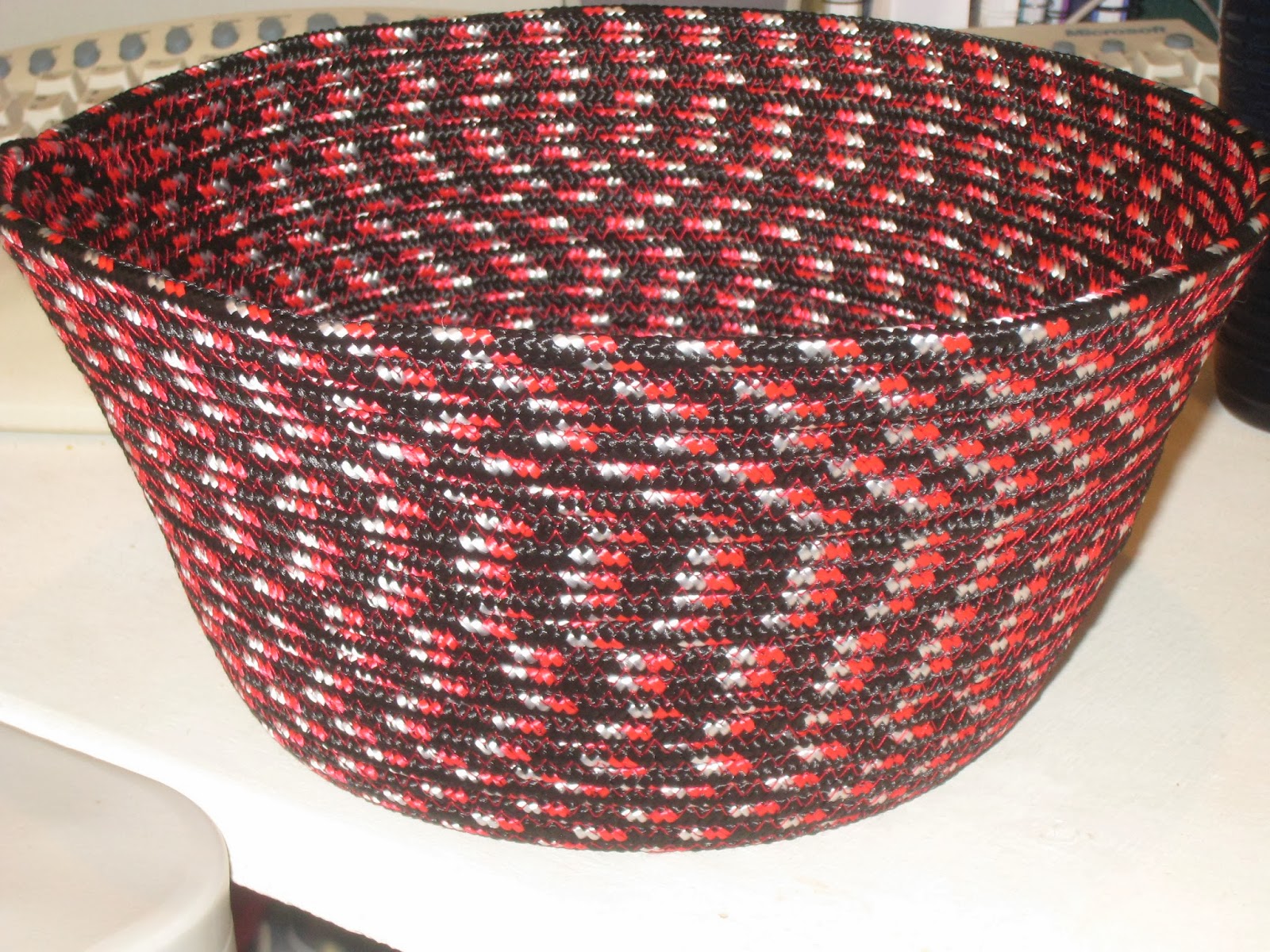 a second one!  I am trying to learn shaping with the colored rope before tackling the addition of fabric strips, and the shaping is completely different on each machine, so they might not be my best work, but I especially like the second one.  I still need a lot of practice getting the sides right when trying to slant them, but I'm making progress.

Unfortunately, by that point I had simply worn out my back muscles, and ended up missing a Secret Santa party last night.  It's one of 2, so I'll still get to participate, and I had such a great day that, while I was disappointed, having a good day in the cold was still such a high that it was hard to be upset.  I did, however, decide that, since I will have to break my WIP streak very soon anyway, that I could have a new project if I was going to miss a party.  I'm not exactly Pollyanna, so there was a wee bit of sulking over being home. I started a cowl in dark plum, but as an evening project the yarn was a bit dark, so I also started a red scarf.  Blogger has stopped letting me add pictures, or you'd be seeing them right now.  I haven't given up on my WIPs, and in fact am now just over halfway on the peach lace mohair shawl, but if I'm going to be mobile again and out running errands, it will be nice to have some portable purse knitting again.  I foresee a LOT of knitting time in the post office next week....................