Longer Update - The Saga of the Birthday Poncho

With Andy camping and a solo weekend yawning before me, I grabbed the yarn I bought specifically to finish the poncho only to discover, 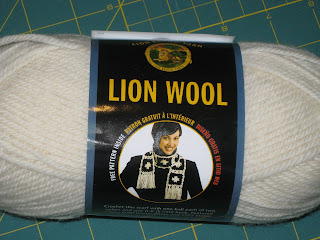 it was the right color but the wrong yarn. It wasn't even a yarn that would "get by" as the recipient is bound to be machine washing the poncho and a feltable yarn would be a disaster. Discouraged, I went to bed and read of knitters who checked the labels before leaving the store. 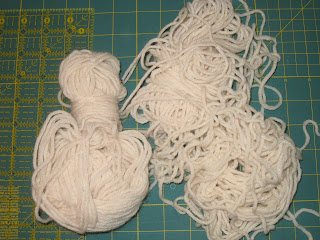 Remnants!!!!!! I have kicked myself over and over for being silly enough to keep little tiny balls of leftover yarn and for once I have been truly, TRULY thankful for this obsession. 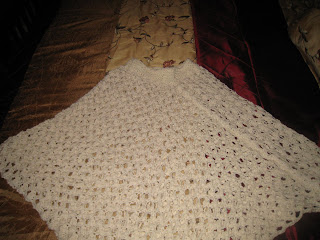 and I, flakiest of knitters, have finished 8 WIPs in a row!!!!!! And people say miracles never happen!!!

I also spent some quality time with the sewing machine, and almost have 3 Halloween bags ready to be sewn together, 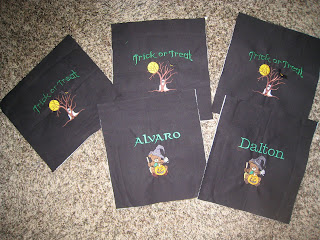 and two of them aren't even overdue yet.

Theo and I finally washed and blocked the red toddler sweater 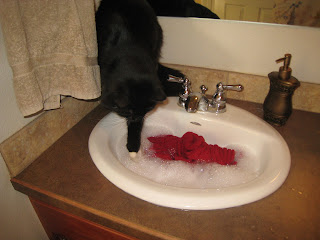 and then spent some time drying ourselves and the counters off.

And in unrelated news, Craft Warehouse has totally ignored my existence, but a very nice woman named Barbara emailed me back from Jane's Fiber and Beads said they had the beads I was looking for--though they were called something else altogether so I don't feel silly for not being able to figure out for myself whether or not they had what I was looking for--and that they had 3 tubes left. Visa in hand, I immediately called and ordered all 3 tubes. I have no idea how many beads that will be but I am taking NO chances by now. We still have half a pair of pajamas at Chateau Sutton-Goar because we can't find one lousy yard of fabric, so we do not fool with "just getting by" any longer. Fleur has been saved!!!!!

* I have sent a desperate, begging email to the Craft Warehouse corporate headquarters to see if they can send me the correct beads from ANY store. I would have sent them a picture of how much knitting I will have to rip out if I can't match the beads, but their form wouldn't let me.

* The birthday poncho is finished (FINALLY) but missed the Ravelympics deadline by a few hours. Still, WIP #8 is done!

* I did some sewing on Saturday, and Sunday was taken up with canning tomatoes and pasta sauce using tomatoes. I'm not ready to discuss it just yet.

* The yarn I ordered to finish the shawl has indeed made it out of Colorado, reaching Salt Lake City on the 21st--and hasn't been heard from since. I am still hopeful, but why invest in a tracking system if you're only going to use it some of the time?

Rats, now it's back to that pesky "work" thing. It interferes so much with my knitting time!
Posted by Toni at 5:52 AM No comments: