Okay--so it's time to admit that I'm NOT going to have all the boxes unpacked before going back to work, but that's okay.  I've made progress, though, and some of the time we can even find stuff.  It's worth it, though.  About 2 weeks ago there was a wreck at the intersection leading into our old subdivision because of the crazy school traffic, and the only surprise is that it didn't happen sooner.  And that's before the new subdivision of overcrowded homes has gone in.  Even if the F35s are sent elsewhere, it's great to be out of there.

I took yesterday off to sew AND get some pictures of my sewing progress.  I'm very proud of this: 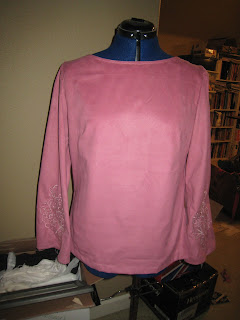 I have no idea what I intended to do with this fabric--especially since there wasn't enough of it to do most patterns--so since there was no emotional stake here, I convinced myself to embroider the bottom edges of the sleeves. 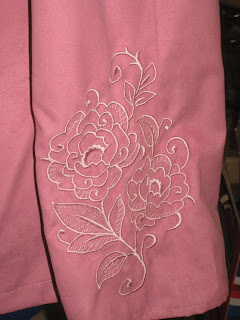 With embroidering, there's always a chance it won't work, and I didn't have enough fabric to cut out new sleeves if it went badly, so I did the sleeves first, so I wasn't throwing away a half-finished shirt.  It's a bit stiff in the picture because I used tearaway stabilizer, which is a bit stiff, but will soften up and come out. I'm thrilled with how it looks and excited for cooler weather.  I also finished the microsuede pants, and 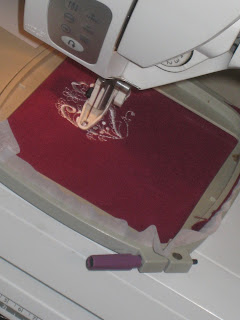 have embroidered the pocket of the next shirt!  I don't have all the pieces for this shirt cut out yet, partly because 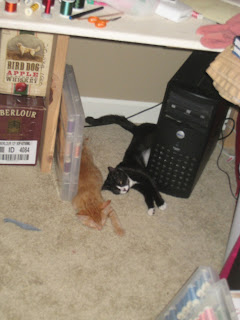 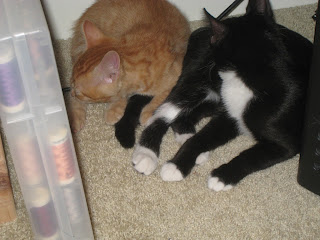 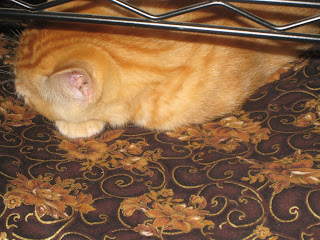 the kittens have discovered sewing.  Also house plants, ankle biting, bubble wrap, and the joys of sitting on keyboards.  Theo is doing better with them--sometimes  even playing with them, which is fun.  Sometimes he walks off muttering under his breathe about those pesky kids, but we think he likes the company--at least when Milo isn't pouncing on him.  We're very careful to give Theo time without them, because they are exhausting and he's 11. All 3 of them in the sewing room can be challenging, but I did manage to sort out some fabric to donate: 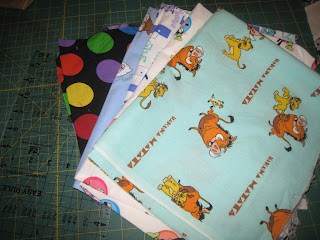 It's only 2 1/8 yards, but admitting that I'm never going to do anything with these was very freeing.  Let them find a better home, while I move on to fabrics I really want to play with, like these: 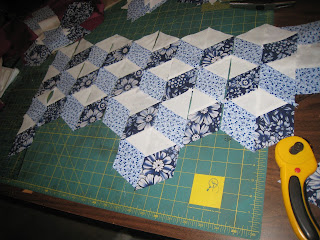 I watched a video making tumbling blocks look fun and relatively easy, but partway through I decided it was a bit monotonous with just three colors.  Luckily a humongous fabric stash has its perks, like providing lots of options if you can find them, so I added a few lavender blocks scattered throughout the quilt: 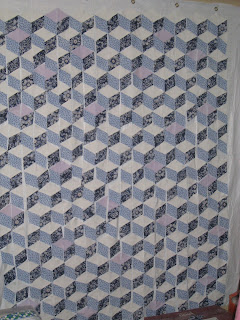 Because I have space now, I was able to add a design wall, which has been SO helpful with this project!  I love it.  I played with the layout a lot, and now I'm sewing everything together into strips and it's keeping them straight for me.  I'm not sure what I'll do to quilt it yet, but I'm thinking either a variegated blue/purple thread or purple thread.  The darker blue print has shades of purple in it, so I think it will be a nice accent and a bit of a creative stretch for me.  I can get a bit hung up on whether or not something will work, but having just moved my fabric stash, I keep reminding myself that I have an INCREDIBLE amount of fabric, and if I mess up a project, I can just start another one from stash and it won't really matter.  Maybe I should paint that on the wall in the sewing room.......I have a lot of fabric still to get through.....:)

There Has Been Sewing!

And a LOT of unpacking.  We've made progress, and I've already emptied one more box this morning, but there are so MANY!!!  The sewing room is especially hard because I left behind all my wonderful shelving, so there is literally nowhere to put things as I unpack them.  I did run across my rope stash, so the first project in the new house was a large storage basket, 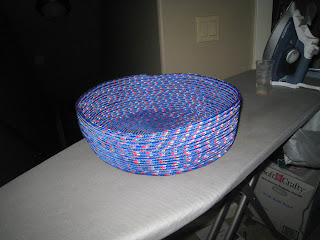 and I could use a bunch more.  I'd saved a bunch of Andy's old jeans to make hanging storage for his old closet, and since I found that box, I've been cutting the denim into strips and I'm trying a new idea: 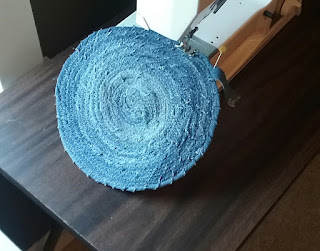 twisting the denim strips into rope AS I sew.  The beginning was a bit rough and the bottom is puckering a bit, but as it's just for storage I don't really care.  I could be wrapping the denim around rope, but I was worried about how heavy that might be, and if this works, it's a great way to use up denim.  Besides, the rope stash has been commandeered: 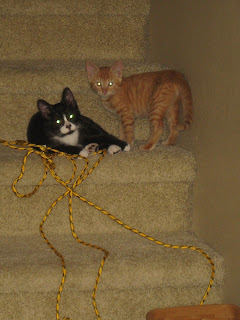 I also found my Easter fabrics, so Theo and I have been working on a Christmas present 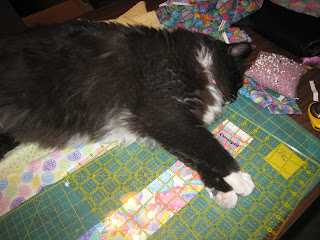 with a new layout 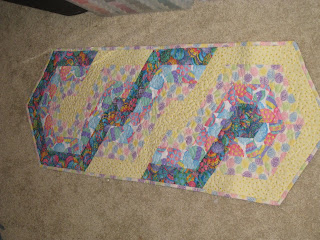 and I have to admit, this one was much more difficult to keep straight.  I'm pleased with how it turned out, and didn't even sew anything the wrong way round.  I saved that for the small runner for us with the leftover triangles, 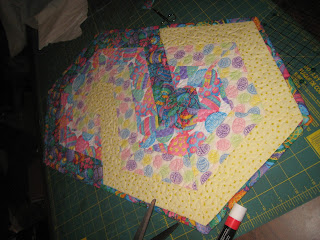 and a layout I've used before and should have been able to do without incident.  Should.  Ahem.........

It was while free-motion quilting the runners that I discovered that the lowering mechanism of the sewing table doesn't really work for me.  I wasn't positive it would, and I was really just interested in it for the side drawers, to be honest, so 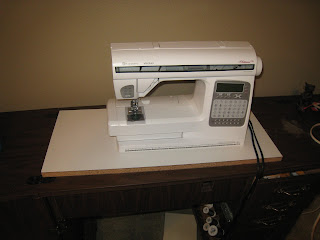 I don't know what this board is actually from, but it's doing a nice job holding up my sewing machine.  We're running into lots of mystery objects as we unpack.  We tried to be really good during the moving process to get rid of such things, but once you get toward the end of packing, those last just-dump-the-drawer-into-anything-open boxes are always challenging.  It's my suspicion that this is REALLY how Jimmy Hoffa disappeared.  Some mobster was moving, and just got down to those last few boxes that are never really labeled and that one never gets around to unpacking......

You might think that with EVERYTHING that we've done this year, I'd have given up on my 100-projects for the year goal, but it's only September and I only need just over 60 projects to go, and I have an embroidery machine..... 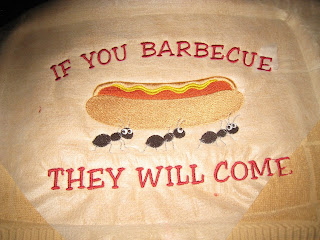 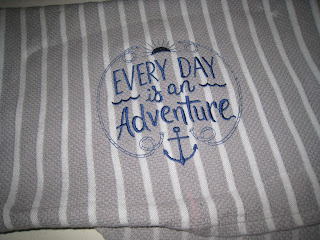 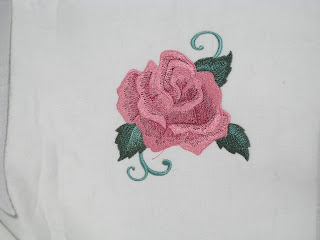 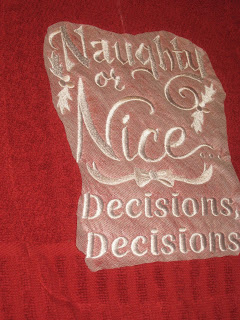 and I was able to locate both fabric AND pattern for a new microsuede shirt, 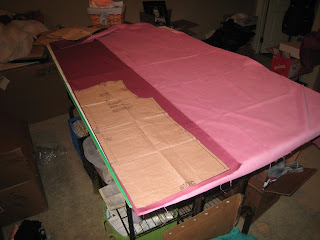 as well as a microsuede shirt/pants set, which is Theo's favorite: 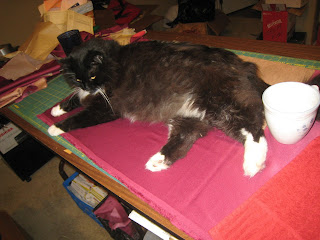 When these are done, about 8 yards of fabric will be out of the stash, and I'll have some new clothes for my new job!  Funnily enough, for all the applications I've filled out and resumes I've sent, I got an email from one of my favorite clients from when I sold phone systems saying that if I were ever looking again, they had a place for me.  We've met a couple times, I already know several of the people there, and the NEWEST salesperson they have has been there 3 years.  The one I know has been there 18 years.  So, I join them on September 18!  Over the years I've sent them referrals, so I know they treat customers well, treat employees well, and I already like the people there.  I was going to wait and start the first of October, but I'm ready to go to work and REALLY ready to do something besides unpack.  :)
Posted by Toni at 8:56 AM 6 comments: