As it's the weekend, it's hard to really say whether I'm still on vacation or not--especially considering how much kitty-care has been happening during my "vacation," but there was some ornament progress yesterday, 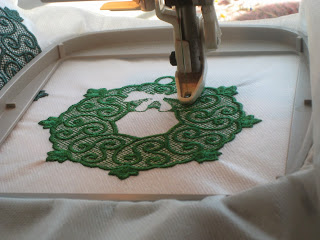 and I am only 29 ornaments away from my goal!  I'm going to can some tomatoes this morning, but the jars and lids are already cleaned so it should be a pretty quick project, so I'll have some time for crafting this afternoon, so maybe 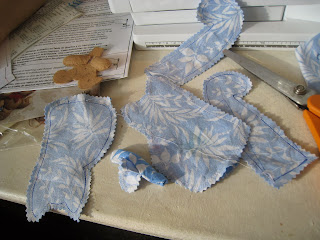 there will be two more cat ornaments by the end of the day.  That little mass of fabric in the center is an attempt at a candy cane ornament from a cookie cutter, and is being such a pain to turn inside-out that it may never get past this stage.

I had hoped to finish a bunch of sewing projects this past week, but next time I'll know to check with the cats to see what their schedule is going to be.  Theo seems to resent the attention Calisto is getting, and is refusing to eat his supplement-enriched food, which means he could have another run to the vet soon. Calisto almost got another trip yesterday as they said to watch her and bring her in if she wasn't eating.  In the morning, she did refuse to eat, but she often suspects we are trying to poison her and will refuse food, and now that she has definite PROOF that I'm poisoning her with bubble-gum flavored antibiotics, it's easy to see her point.  But hunger won out and she's decided to take her chances.  I can't say that I really blame her--I would be pretty chapped about someone ramming bubble-bum flavored ANYTHING down my throat, and as a human it makes slightly more sense. 8 days left..........