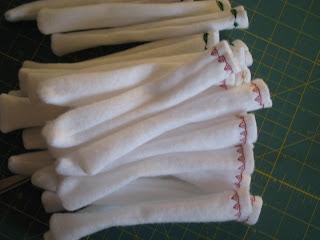 I believe I made 35 of these little felt tubes (I did count, but have already forgotten and now several are wrapped, and Andy just brought me a white chocolate martini, so a guess is as close as we're going to get tonight.)  Even Theo was exhausted by the time we were done: 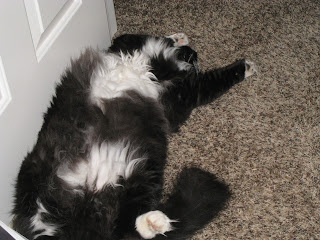 I do like how the nine I did today look: 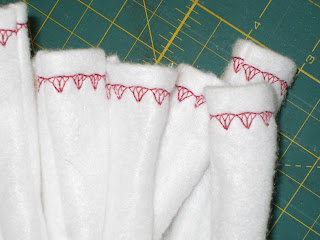 even though I wasn't initially very pleased with this decorative stitch.  I think these guys qualify as the "most work for least amount of yards used" project for the year.

Speaking of which, I have resolved to buy NO yarn or fabric for the whole of 2011.  If I make it, this will be huge, because the last time I tried this I did make it without buying any yarn, but only made it to October on the fabric front.  To do this, however, is going to require some careful planning as 2011 is also my year to make the Christmas gifts (I'm not really getting credit for those darn tubes).  So I've been making a list, checking it against my stash in Ravelry and the sewing room shelves, and I discovered something I never thought I would say....or at least, wouldn't say for another 3 years:


I didn't have the yarn I needed for 3 proposed gifts.
[Let's all pause here to recover from the shock, shall we?]
Typically when I buy yarn, I buy an entire sweater's worth, which works out really well on the sweater front, but I have lots of scarves planned for next year, and was either going to have to forfeit sweaters to scarves (which I don't want to do) or I needed some yarn.  So I stopped by Hancock Fabric today to pick up yarn for one man's scarf: 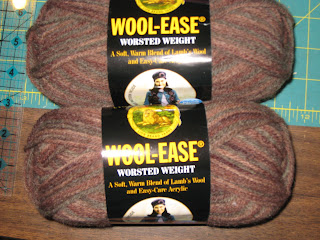 and for two women's scarves. 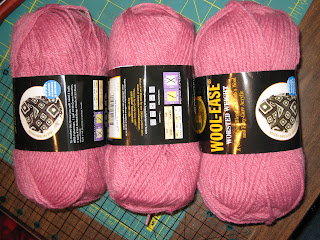 I have a couple lace scarves in the gift bin, but not everyone I know is the lace scarf sort of person, NOR is everyone I know the can-be-trusted-with-things-out-of-feltable-yarn sort.  So, add 5 skeins of wool/acrylic blend to the stash...unless I can get them knit up in 15 days.....
To GET to the yarn, I had to pass Hancock Fabric's discount bin, where I was viciously attacked by trims that were 60% off, 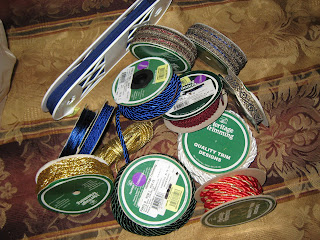 and buttons that were 90% off. 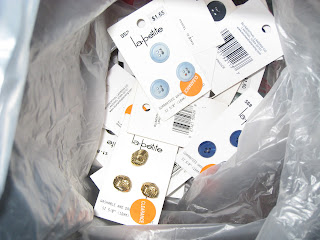 If my foot hadn't been hurting, I would probably still be there rummaging through the buttons.  At least I have made the yarn & fabric ban one step easier for next year:  I'm out of money.  It's amazing what a motivator that can be.

Realizing my stash is moving the wrong direction, I have been knitting whenever possible.  Meet the new portable project: 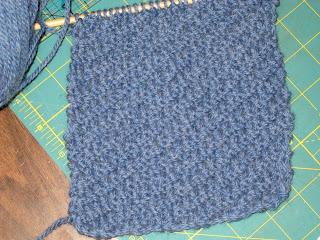 which will be a scarf when it grows up.  I'd like to add fringe when it is done, but that will depend on 1) me having enough yarn left over to do any sort of fringe as I only have on ball of this yarn, and 2) whether adding fringe makes it a less "manly" scarf.  Andy says no fringe, but I don't know.  What about short fringe?  That's sort of manly, right?

I have also started a pair of socks for a friend's birthday in February.  I'm going to do some cables on these, so thought it might take a while & should get underway a bit early. 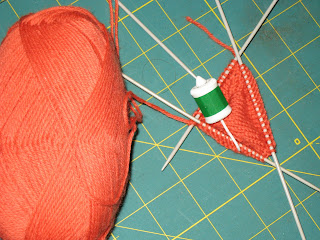 I'm using the "Magic Cast On" for toe-up socks, but otherwise, I'm just making this up from my favorite sock recipe.  Since I'm doing toe-up I'll be doing a short-row heel which may not be as durable as the heel-flap methods, but he has big feet, so this way I'll know I have enough yarn.

I may need to set the alarm an hour earlier for Finishing Friday......