Blogger is still broken, but after an afternoon of crafting, I now have 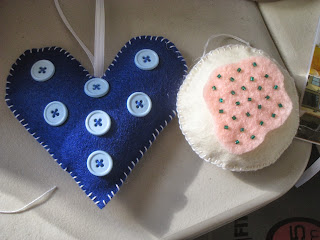 two new felt ornaments.  Amazingly, I had put the beads on a sugar cookie ornament but had never sewn it together, so that was a nice find.  They're such cute ornaments.

I also finished yet another mitten ornament, 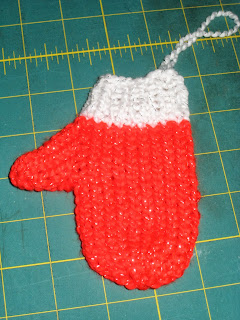 and even finished color-work ornament number 10: 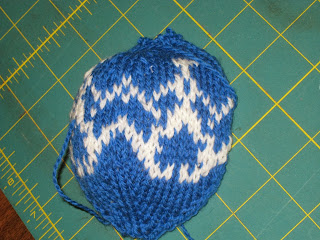 which is a jumping skier if you can't tell.  I still don't think I'll get all 55 done this year, but just a few weeks ago, I wasn't sure if I'd even get to TEN, so that's exciting. I've even started 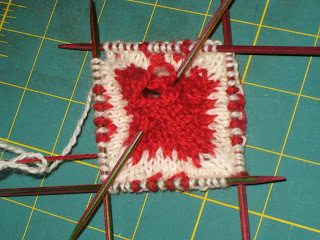 number 11!  This will only be the second one I've done in red, which is sort of funny as I did a blue-Christmas theme in the main room last year so won't be decorating with blue this year, even with all the cool new ornaments.  We have a huge entryway in the house, and we now have a big 9-foot tree to go in there in addition to the regular tree I put in the living room, and someday I'd like to decorate the entryway in blue, but one of the things that prompted the Great Ornament Experiment is that I don't have enough ornaments of ANY color to decorate both trees, so ever since we got it, the big tree has been covered in cheap dollar-store red bows to make it look less bare.  Years and years ago, I started collecting Christmas ornaments from places I've been to, which makes decorating really fun and nostalgic, and I have a lot of ornaments I've been given through the years, and I like that all the ornaments mean something to me, so I don't like having purchased ornaments on it.  In a few years, I might have enough blue ornaments collected/made to do that big tree.  In the meantime, the goal is to just be able to cover the tree.  And a few red ornaments in the mix would certainly help. 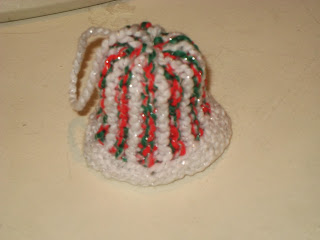