In an ordinary week, I would have perhaps finished some knitting.........or done some knitting.  But as anyone who has been seeing Idaho in the national news lately will probably know, this is not an ordinary week.  I've been posting the details on my other blog so I won't do so here, but I mention it here as the only excuse I have for having only made it to here 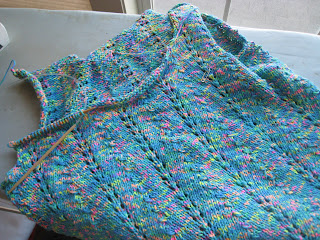 on the spring tank top.  One tiny front piece and then just the neck and arm holes and it's done.  So like 5 stitches more than last time.  Sheesh--if I were knitting any slower I'd be tinking.

The good news is that Andy has not been such a slug, so I helped him glue the first shelves together: 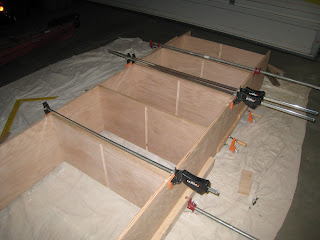 They're made from oak and oak plywood, and will be stained a reddish-brown--sort of to look like cherry office furniture.  We've been trying out different colors of stain and wood combinations and found redder hues look best against the green paint.  We talked about using nicer wood, but with the size of my stash, only a very small portion of these shelves will ever be seen by anyone ever again.  Sort of like Andy's pajama top.

Andy also helped me hang the sewing thread this week: 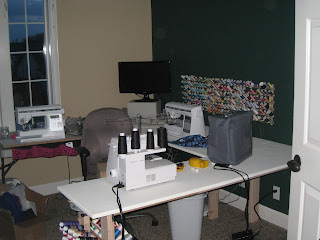 and I have finally adjusted to being much closer to my new well-your-eyesight-is-only-going-to-get-worse-at-your-age monitor. I didn't think about it being closer, but for the first few days I felt like the computer was yelling at me anytime I used it--which is really the serger's job in this room. Andy is hoping to bring at least the first shelf "carcass" up here next weekend, so I could soon have a finished sewing room!  Or finished in the "stuff Andy is doing" sense.  I have a feeling I'll be only STARTING at that point......