After all the trouble with the laces on the first pillow, the second one was no problem at all--I got the original method to work.  I have no idea why--maybe I was stronger yesterday.  I also have no idea why, having cut them out at the same time and probably mixing and matching pieces, 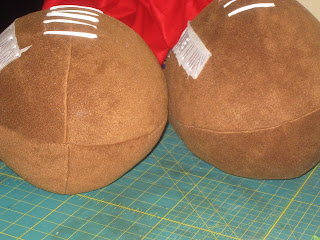 the one on the left is fat and wide and the one on the right is taller than it is wide.  It doesn't really matter, but it was funny.  They should be exactly the same.  They are even washed, 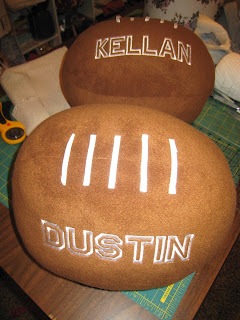 and I have to admit, I'm quite pleased with how they turned out.  They could be a bit more football-shaped, but as they are pillows, I think it works out.

I even finished up the music bag! 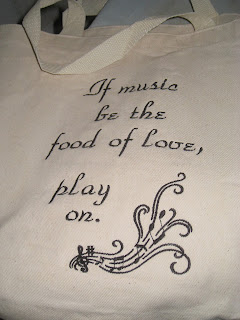 Though TWO rounds with the iron on high hasn't eliminated all the wrinkles in it.  I even took it out of the dryer while still wet to iron without success, so these are quite determined wrinkles.  I suppose it happens to the best of us after a while.......

There are TWO new color work ornaments as well, 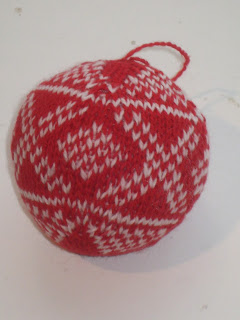 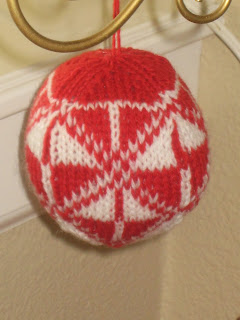 which I thought would even out the red with the blue ornaments, but it doesn't.  I've now done 14 ornaments from the book, and 9 of them are in blue.  I didn't realize I had that much bias in my knitting.  The weird thing is that the book pictures almost all of them in red, which is what I liked about them in the first place.  Maybe in 10 or so years I'll have done all 55 in both blue AND red.  One can dream...... 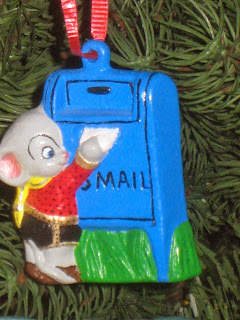 my oldest ornaments that I made are ceramic ones that I painted in high school.  Some turned out better than others, and my very favorite was a little mouse shepherd that I was pretty proud of.....and which I dropped on the hardwood floor our very first Christmas together in this house.  Every year when I take out the ornaments, I'm always a little bit sorry that he's gone and that the rest of them don't look a wee bit better.  THIS year I decided to check the internet and, 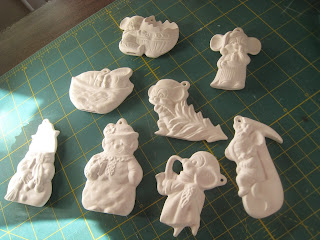 while I didn't find the shepherd, I did find some new ornaments, so I have pushed back the next spending ban to the first of the year and ordered some paint as well.  This is sort of an unusual thing for me to do as I have stuck closely with knitting and generally don't pick up new hobbies because I don't want to find new space or extra time for them--especially since the last time I tried a new hobby was buying a cheap little sewing machine 9 years ago to see if sewing was more fun than it was when I was a kid.  We all know how THAT turned out for me.  But these don't require much space, and as it's something I've thought about every year since breaking that poor little ornament, I don't think it's something I'll pick up for a bit and never touch again.   And one of the great things about the year-long spending ban is that I saved up so much of my allowance that the money is there for the things that I really do want to do.  These are so cute and I might have had trouble staying focused on the things I need to get done, except that, having checked all other sources first, I ordered paints from Joanns because I could add some bias tape for those quilted ornaments and some variegated thread for the rope bowls, and it's almost a full week later and my order is still "processing."  That's fine--if I had tried to go to the actual store, I'd probably have spent a full week waiting in line for their cashiers anyway.  Today is wrapping and packaging gifts, then maybe the holiday letter, and by the time I get all of THAT done, Joanns will have seen fit to actually ship my order.  Or maybe it will be a surprise for New Year's.......