A Big Old Fabric Snarl for the Evening.....

Jellyrolls are the sock yarn of the quilting world--tempting, take up relatively a small amount of space but can take a surprisingly long time to use up.  As I prefer to prewash fabric before sewing with it, I thought it would be brilliant to throw--not one, but TWO--jellyrolls into a lingerie bag and wash them.   And in case you're wondering what happens to 84 strips of cotton fabric sent through several various washer & dryer cycles involving spinning, 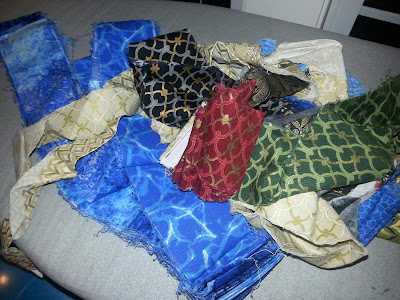 the word you're looking for would be "snarl."  A big one.  This is only the part I ironed this evening.

I haven't quite decided what I'm going to do with either of them, but I still have a LOT of ironing to finish before having to decide.  Another wild Friday night around here........
Posted by Toni at 8:30 PM 1 comment:

Two nations woke up today--both hurt and angry and wondering how the other could treat them this way.  It may be that this wall is bigger and wider than we had ever imagined, and I'm honestly not sure we'll find a gateway.  For my friends who voted for Trump, I know the protests outrage you, but my question is:  Did the protests over Obama's election upset you?  They happened--both in 2008 and in 2012.  And did you speak out against them?  There was a lot of racial imagery in those and in the Tea Party protests, and again I ask:  did you speak out against them?  Because here's the thing: very shortly after Obama was elected, lots of my Republican friends circulated a "joke" about praying for Obama's death.  Was it racist or just because he wasn't their candidate, and how is it okay to joke about it either way?  If you saw it, did you laugh?  Did you pass it on?  Did you tell the person who sent it that it was inappropriate?  For years I had been going to a relative to get my hair cut, and I think it was one year after Obama's election and during the normal chit-chat during a haircut, I asked her if they had any plans for the upcoming Martin Luther King holiday, and rather than answering with any plans, she complained about it (I forget why--I mean, who hates holidays?) and said that she hoped "those people" were happy now.  As we were actually the only people in the room, she wasn't talking about a group standing over somewhere else.  Donald Trump himself demanded to see Obama's birth certificate, creating the "birther" movement, and dogged Obama for his entire presidency.  Until then, no one had EVER questioned the citizenship of a presidential candidate, so to do so with the first multiracial one is, in fact, racist.  And Trump continued to beat this horse LONG after Obama showed his birth certificate to the world.  Now the man who unceasingly said that Obama was born in Kenya was elected President of the US by mostly white voters--could you even stop to ask yourself how you might feel if you were black?  I am not saying you are not entitled to your feelings--of course you are.  But if it was different when your party did it, then maybe we've found one of the problems.

I am white--so white that you could suffer temporary snow blindness if you walked into a room and saw me naked--and with a few exceptions, I can say without a doubt that almost none of the people I know who voted for Trump would burn a cross on someone's yard or paint a swastika or call someone a racial slur.  We don't do that.  But what Obama's presidency has shown us is that some people still do.  And the KKK is planning a "Victory March" December 3  to celebrate Trump's victory, because even though Trump's campaign did denounce the KKK endorsement as "repugnant," he campaigned on a message that closely resembled that of the KKK.  Again, many of the people I know who voted for Trump do not support the racially-divisive things that he said, but one of the perks to being a white heterosexual is that one can not agree with what he said and not be affected BY the things he said.  Not everyone is so lucky, and they're frightened and angry and hurt.  That's why if it isn't people of both parties who stand up and say that this message of hate is NOT who we are, then we have no chance of uniting as a country.  I know it's hard not to be frightened of a changing country--we've been the world superpower my entire life and that is slipping away and it's frightening--but we're not going to solve it by scapegoating anyone or fearing each other.  Nothing has ever been solved by fear.  Do we move forward together or divided?  That's the choice now.
Posted by Toni at 2:25 PM 4 comments: