Remember the redwork ornament idea I was toying with? 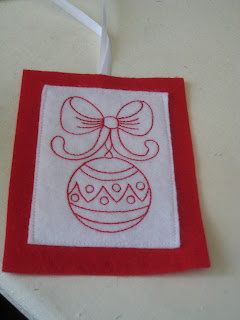 It gets the award for Problem Ornament Thus Far.  The issue is to get everything stitched down without anything shifting or pulling.  In the above ornament, I tried pinning.  It's close, but it's a bit wonky.

From a safe distance, 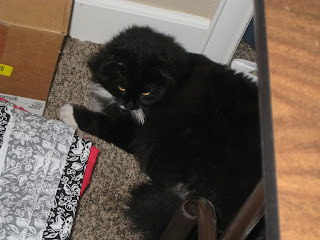 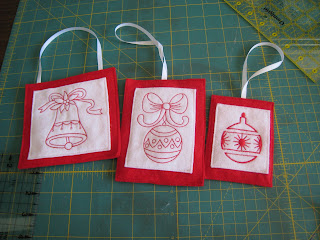 and basically prove that my fabric glue stick didn't really work either.  Next up was a regular glue stick, then finally, being completely desperate, 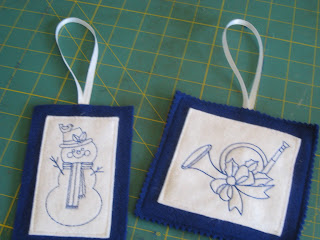 I broke out the hot glue gun.  Anyone who knows my track record with the hot glue gun will recognize this for the sign of desperation that it was.  Shockingly, that worked much better, but in trying a new approach for sewing the second piece of blue on for the backing on the ornament on the right, I made it exceptionally hard to cut out  (Note to self: remember the ribbon hanger might make it awfully hard to cut an ornament out after the fact).  So, on the final ornament--the snowman--I gave up on sewing altogether and hot-glued the thing on, which finally worked as I had hoped.  No other ornament has taken FIVE tries to get correct, and what makes it even stranger is that it was the hot glue gun that solved the problem.  Usually in my life, the hot glue gun is the fastest way to CREATE a problem.  But it looks like this ornament experiment is going to change my views on a few things.  Maybe by December, I'll even have a better view of Fun Fur.....

While I was wrestling with the red-work ornaments, 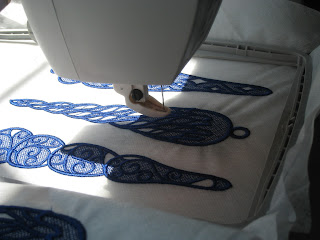 Jeeves effortlessly made 3 new icicle ornaments, so I am now at 131 ornaments for the year.  Thank heavens the wonky ornaments still count as ornaments.....