Theo can pee!!!!  Day two of my vacation WAS going to consist of cramming him into the cat carrier and dropping him off at the vet's while I went to my appointment with the physiatrist.  It would probably be more of a vacation if MY appointment got cancelled as well, but as only one of us was facing a rather unfortunate episode involving a thermometer, I can cope my own appointment.

And in the I-can't-believe-I've-made-it-this-far category, I'm starting day two of my vacation with 321 ornaments done for the year so far and 44 to go.  I think making Christmas ornaments is actually going to continue as a regular part of my hobbies, but I do have to admit that the idea of making something slightly larger than 6 inches is alluring as well.  Guess size DOES matter.  :)

I finished one of the blue kitty ornaments, 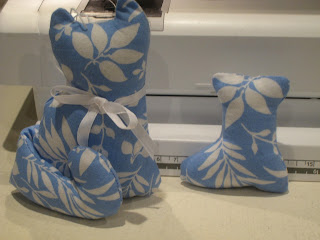 which is cute, if not very Christmas-y, and the ski boot is stuffed and sewn up, but looks a little bit boring.  Maybe this is why I didn't remember owning the ski boot cookie cutter.  I keep thinking it needs something, but I'm not sure what.  I tried a little snowflake on it, but the pattern is too busy for anything white to show up, and I don't have anything in a blue that matches, so it maybe just get to be a very boring ornament #322.  One thing I'm learning with the ornaments is fussing with them doesn't always improve them.  (There's probably a life-lesson there, but it's 6:00 AM and that sort of thinking doesn't usually kick in before 8:00)  I had been hanging on to this little red ornament, 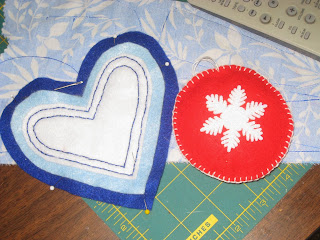 thinking it needed a little more than just a big snowflake, but looking at it yesterday I decided it was quite fine on its own and stitched it up.  The blue one I keep fussing with, and after adding a second row of stitching to make it look less plain, I was less happy with it than when I started.  So this morning, 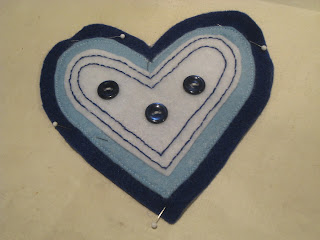 I made it worse.  Actually, adding some machine stitching around the edge of the light blue now hides the fact that I'd cut too far in to the top of the heart, so that part is okay.  I'm not exactly sure about the buttons, though.  I think they sort of make it look like a face (did I mention it is 6:00 AM?).  Maybe I'll like it better when the coffee kicks in......and also figure out what I have just done to the formatting....

There are, of course, more new lace ornaments.  The dove is the latest, 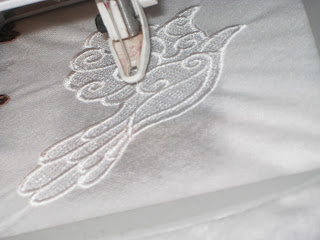 but there are some new holly ornaments as well. 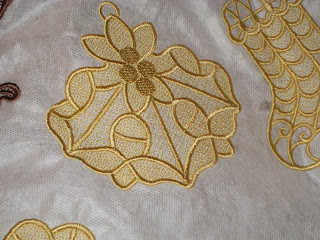 Later I'll scrounge out some green thread, but you can see why I was so excited about finally getting new thread: 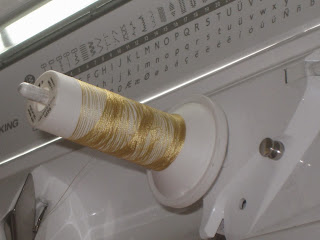 I mean, aside from it arriving in a box at the doorstep and being new.  (Really, the box alone was moderately exciting by now.)  This spool brings me to 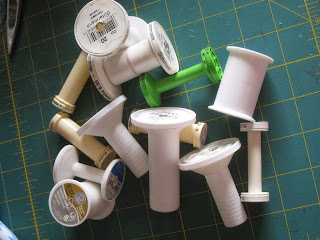 for the year.  I've purchased more spools than that in one shopping trip, so I am really am thinking about doing a second buying ban for 2014--although THIS time I'm going to make an exception for clothing.  Yesterday I placed a rather extensive order with Amazon, and when the first thing on your list is socks and underwear, adjustments need to be made.  Of course, after I finally get everything on my list, I probably won't need anything for another year anyway.  And if my goal next year is 100 finished objects and nothing new comes into the sewing room, I might really see a little bit of a dent in the sewing room by this time next year.  (It's this sort of completely unfounded optimism that keeps me going on these challenges each year.......)