Hold On To Your Hats, Folks

The July Project of the Month is FINISHED. 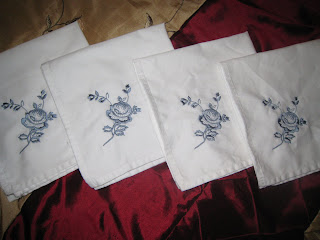 I know--quite a record for myself and probably never one to be repeated.

I ended up not doing half with navy thread, because for some inexplicable reason, there are seven napkins--not eight. Having bought these quite some time ago, it's impossible to know what happened--were there eight and one got lost in the laundering process (which would have been more than a year ago anyway)? Were they on clearance and I could only find seven? Did the eighth one get sucked into the sewing room black hole that now contains--among other things--2 pattern instruction sheets and a half-finished pajama top? Did I only buy seven because there are only six placemats and I was just looking to have a spare? This is a great mystery, but I embroidered the seven I had, wrote down the thread color I used in the off-chance I find the eighth napkin (I know--planning ahead! So unlike me!), and called it good. Another project down!!!! (And yes, groping around until I found a sewing project bag is totally & completely cheating....)

Today some good friends are taking us out for lunch, and they have a little dog with a broken leg--with which we can seriously sympathize. They are the sort of loving people who give our cats Christmas gifts & bring toys for them, so I thought it only fitting to have a get-well gift for their little dog. So yesterday afternoon I made a little flannel quilt for Zoe: 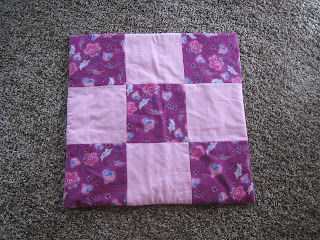 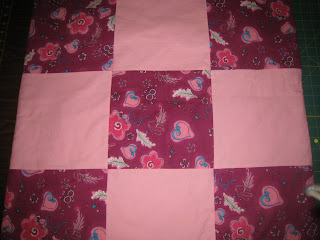 It was a relatively fast project, and since I sewed the batting, top and bottom together then turned them inside out like a pillow, I did not actually quilt the blanket. I have tried that in the past, and there's just no way to not end up with puckers and unintentional darts. I did tack it here & there, so the batting will stay in place. I'm rather pleased with it, though I had to sleep on it last night before I could publicly admit that I made a get-well gift for a dog.....