Thanks for your kind thoughts everyone.  Callisto wasn't always the nicest cat, but I had her for 13 years and when she wanted to be, she was funny and charming and used to hide in my closet and the only way I would know she was in there was when the closet started purring when I walked in.  Theo has taken to sitting on my feet, so I think we're both missing her.

We knew she wasn't going to last much longer, and after watching Theo searching the house for her, we decided to find him some friends.  Meet the latest additions: 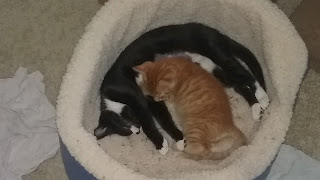 Venus and Milo are settling in well, and so far Theo mostly isn't interested.  We're introducing them slowly as recommended, but Theo wasn't showing the least bit of interest in them through a closed door, so we've let him get a few glimpses of them here and there. It's been a pretty eventful time for him, but luckily he likes the new sewing room, 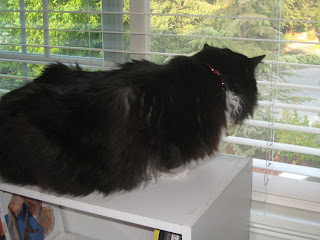 including the view, and sometimes I find him up there without me.  There hasn't been any actual sewing yet, but at least it sort of LOOKS like a sewing room. 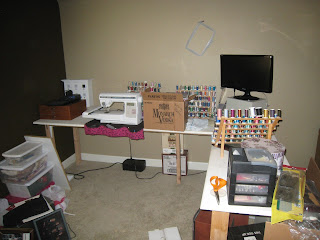 Although with all the liquor boxes everywhere, maybe the sewing room of an alcoholic.  The temporary desk Andy built for me years ago survived the move better than we anticipated, especially since we never had any intention of taking it apart and moving when he built it.  Funny to realize we weren't even THINKING about moving at this time last year.

Unpacking feels like it's going slowly.  Last week I didn't break down any of the boxes as I unpacked them just so I could see some progress, 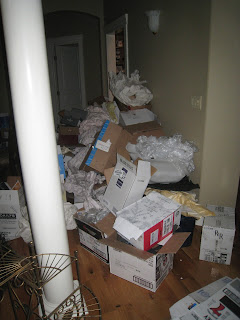 but when we stopped being able to get through the house, we had to haul them to recycling.  There's another truckload almost ready to go again, so I must be making progress--whether or not it feels like it.

My plan for unpacking in the sewing room is to examine everything as I unpack it to make sure I really want it.  These 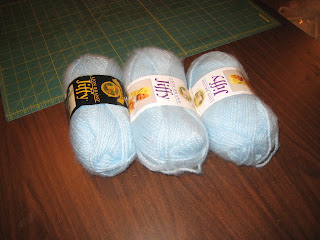 didn't make the cut.  I don't even know what I intended to do with it, but 405 yards out of the stash is what I AM doing with it.  A few books and magazines have followed.  We got rid of a lot before the move, but a second look can't hurt. And maybe a third and fourth.........
Save