Finishing Friday lost some time to physical therapy and pool walking, but I did manage to get this 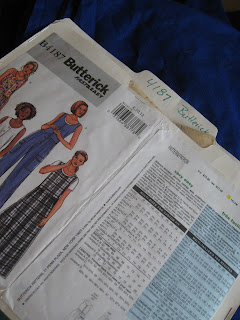 cut out. I'd gotten very lazy and have been cutting out patterns on the floor of our bedroom rather than clearing off the table in the sewing room, but there will be some SERIOUS time spent today clearing off the sewing table because it turns out that the last thing a tired and sore back appreciates is crawling around on the floor. Go figure.

I made a bit of progress on the long-languishing jacket: 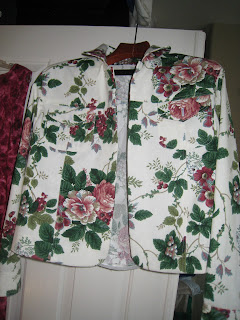 which is ready for the top stitching to stitch down the facing: 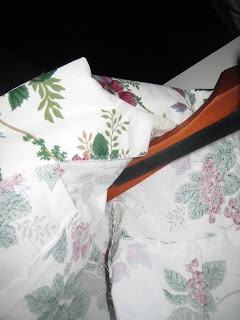 This is always the hardest part of this jacket pattern as no matter how carefully I pin, it puckers a bit.  Yesterday I pressed the facing, then applied steam to the shoulder areas and let it hang on a suit hanger to dry.  This is where a dressmaker's dummy would be REALLY nice to have, but I am considering holding off on that for another year until I've made a more visible dent in the sewing room.  If I do another year of the complete spending ban, there really might be a visible difference in the sewing..........(I hope)

On the knitting front, I have been really, really faithful to the March Madness sweater, but it's a bit harder to want to work with wool when it's hot, and it's supposed to be around 90 the next three days.  This is VERY early for such heat--especially since this is normally the weekend where chance of frost overnight drops to "only" 50%.  I'm thinking that won't be such a problem this year.  So, 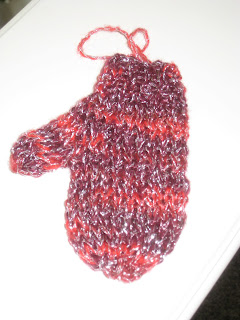 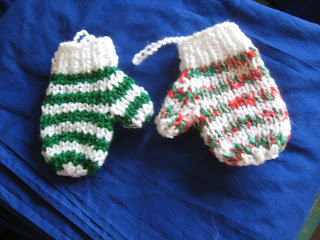 Have you ever been just overjoyed to knit with acrylic?  I didn't remember ever being so myself--or at least not the uber-scratchy craft acrylic I bought for ornaments--but it was a JOY to work with by the time I had to set aside the wool sweater when my sweaty hands could stand it no longer.  I'm thinking these little guys might be VERY popular later in the summer when it's even hotter AND there has been canning involved...........