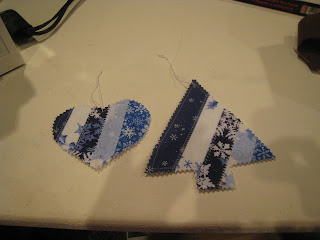 and kept an eye on all suspicious (meaning "dog") activity in the neighborhood. 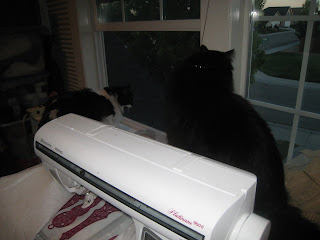 (We try to do our bit for the community)

It seems that we have had our "nice" summer weather, and have moved on to the "hot and horrible" phase.  For crafting, this means that the morning of Finishing Friday--like all mornings--will now be spent in trying to keep the garden alive.  The afternoons, which will now be mostly in the 90s or higher, will be spent somewhere with air conditioning.  I know temperatures are rising and everything, but I still wonder about people who lived here before air conditioning.  Did they just spend the summers naked?

This afternoon's stay-in-the-airiconditioned-house project was: 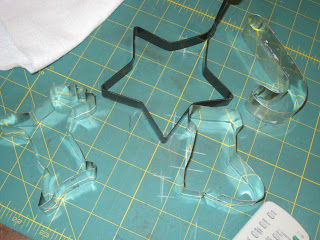 more ornament shapes!  I decided to try out some new shapes, and I thought cookie cutters might be a good source, and these are the ones I found.  We might have more, but I wouldn't swear to it.  I've made sugar cookies maybe twice since we've been in this house--which will be 7 years next month.  Part of it is I don't make a lot of sweets, part is that sugar cookies are one of the few cookies that I actually like so I would gain weight for my efforts, and the remaining part is that I am generally too lazy to do any cooking that involves a rolling pin.  I make the occasional exception for pizza, but that's about it.  Every year I swear I'm going to bake a pie, but it hasn't happened yet.  Sort of like the final bridesmaid's quilt......... 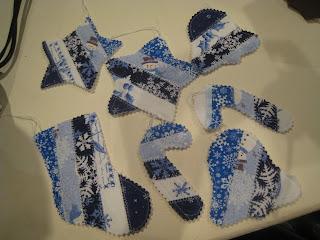 Aside from still having trouble marking on felt, most of them turned out pretty well and I have now completely used up the first set of strips and will start assembling the second one tonight.  One of the candy canes had a bit of a mishap: 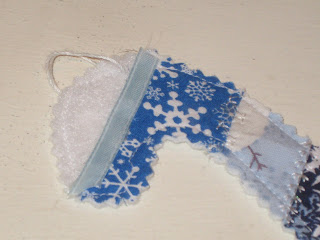 which raises an interesting point.  If one is tracing the ornament design to be sewn on the BACK of the piece, the smart thing to do would be to cut away the excess felt so one keeps all the ornaments on the actual fabric.  Good point, that.  And yet another ornament for the "relatives-we-feel-obligated-to-give-things-to-but-who-never-bother-to-thank-us" bin.  It's a big bin....................