Okay, so in March I failed dismally on my March Sweater Madness, keeping up with the ornaments, the sewing streak, and just pretty much anything crafting related.  But I swear to do better this month.  Ahem...

There was a last-minute ornament catch-up frenzy, which still didn't get me to 90, but I did reach 70 so ended less than a month behind.  There was a second tree ornament: 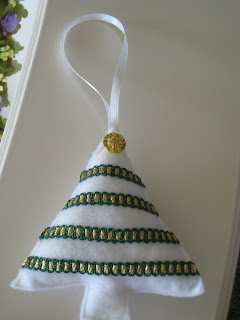 which would look better with a flat star button, but as usual, I don't have any of those.  There were also 6 new treble clef lace ornament, 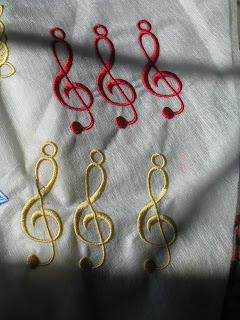 which I hope will STOP smelling like desperation once the stabilizer is soaked away.

Today I decided to try some of the new ornaments Andy gave me for Christmas, so while I write, Jeeves is merrily working away, 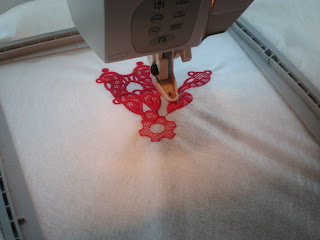 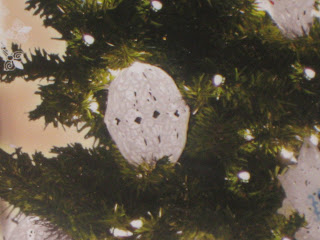 Okay, I don't actually know what eggs have to do with Christmas, but it was the only pattern that didn't require applique, and I wanted to figure out one step at a time.  Somehow one makes two flat lace pieces, then sews them together to get a 3-D lace egg.  If I manage that successfully, the next step is applique.

On the knitting front, I have finished my second WIP for the flower basket dash: 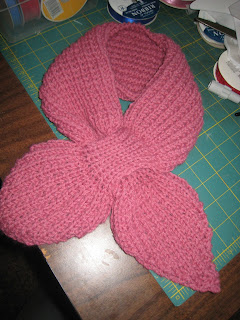 and am really close to getting a third: 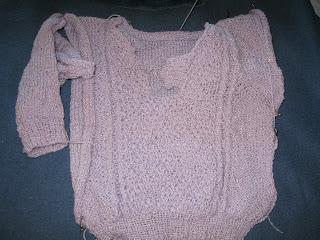 Don't you just hate doing seams?  Even the third-WIP-in-a-row carrot is only helping slightly.  What I want to do is cast on something new.  So I dug this out, 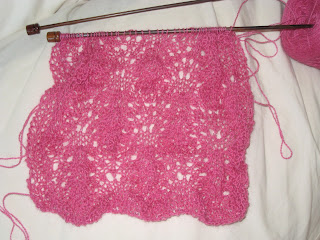 which has had so little attention that it almost counts as a new project.  It's beaded, so it isn't good mindless knitting.  Or good portable knitting.  Or good anything-when-one-wants-to-not-worry-about-spilling-beads-everywhere knitting.  BUT it will be the first beaded thing I've made for myself, so I'm trying to stay focused on that.  And to try to convince myself that sewing seams is a nice, mindless thing to do.  Which probably explains why I'm embroidering right now instead........................

Nominee For the Rudest April Fool's Joke of the Day

This arrived in the mail yesterday: 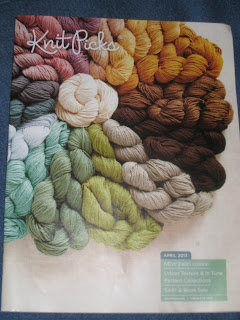 Okay, I could understand them being jerks who didn't care enough to contact their customers or respond to customer emails, but there are legal consequences to breaking laws, and now the AG's office can go after them.  So is Knit Picks stupid or so egotistical that they think laws don't apply to them?  It's really just unbelievable what jerks they've been over all of this, and so to receive a catalog from the last yarn company on the planet I will ever order from on April Fool's day is just perfect.