It Takes A Year

In case you're feeling daring enough to pack up all your possessions and move to a new location, let me warn you that it takes about a year to achieve any sense of normality.  That doesn't mean you'll have figured out where you stashed things when you unpacked, or know how everything works, or anything of that kind--that will still be happening.  But to go back to any sort of activity that you would have done before the house prep/sale/move saga rather than something dominated by the ordeal.

This morning I visited blogs while eating breakfast.  I haven't regularly done that in a year and a half.  I've barely done any knitting all year, but last night I sat down with the Kauni cardigan and got 5 more rows in.  I cooked TWICE yesterday--the new house has the kitchen of my dreams, but we just haven't been "settled" enough to get back into the swing of cooking rather than "scrounging."  It's August and stupid-hot, so gardening is at a minimum, which is a nice break--especially considering there will be a crazy number of tulip bulbs arriving sometime soon.  I'm still not crazy about my job, but with the horrible "training" finally being at an end, I've stopped spending my evenings and weekends looking for jobs, so I finally feel like I'm coming up for air just a little.  And yarn!  The fall stashdash has really motivated me again, and I was excited to run across this yesterday: 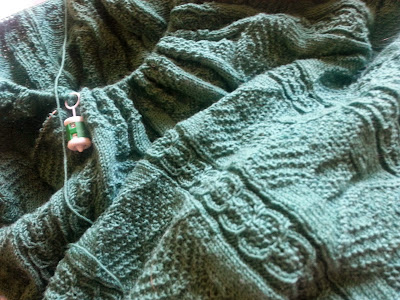 The Alice Starmore sweater!  To be fair, it is probably the only WIP I could have found that is even slower than the Kauni cardigan, but as it's on size 2 needles, it's a great one to do for row-count challenges as it's still years away from being finished.  And I think I even know where the extra yarn for it is, which gives it an edge on Kauni--which is what I was looking for in the first place when I found the Alice Starmore sweater.  You know, as long as I find SOMETHING useful, it doesn't matter what I was actually looking for, right?