I Am Going To Get This

Feeling pretty brave, I decided to be a bit more daring with the new ornament design yesterday, 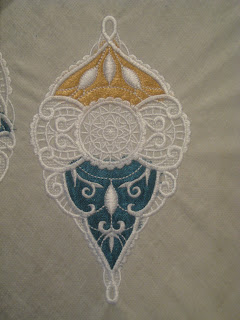 and have now decided that either I don't care as much for white thread on these designs, or I am just not good enough with the applique scissors to do light-colored thread yet.  Considering I managed to draw blood with the blasted things yesterday, gross incompetence with the new scissors is certainly an issue.  I am sort of relieved to know that I actually prefer that these AREN'T in white, as running out of white embroidery thread has been one of my biggest concerns for the no-buying year.

So, after dumping my scrap bin out and finding myself short on scrap pieces of satin in any color EXCEPT gold, I was inspired to experiment with color options with gold (see how nicely that works?)  And since dark thread covers my mistakes better than light, what could be better than 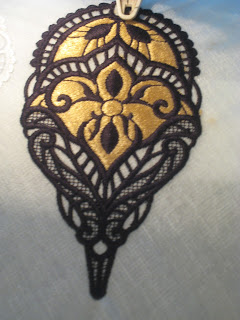 black?  I know it's unusual for a Christmas decoration, but don't you just love how this looks?  I think I have a new favorite ornament--which could lead to a new problem: 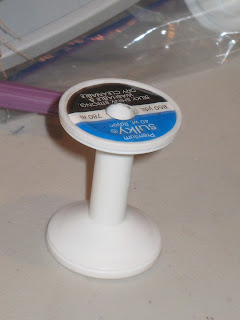 running out of black embroidery thread.  I still have one larger spool of black thread now that this is gone, and there is still part of me that gets excited every time I entirely use up a spool of thread, but how weird would it be to run out of black now?  Thank heavens I still have other options, 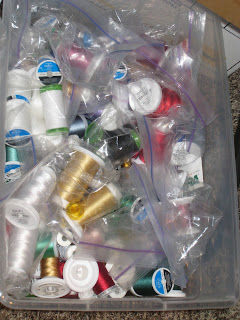 though with free-standing lace, this thread supply isn't nearly as big as it looks, because the smallest spools do not have enough thread to do an ornament.  With lace, the embroidery thread has to be in the bobbin as well as in the needle, so they REALLY suck up the thread.  So only the colors I have in big spools are options.  That shopping list for November is getting bigger and bigger..... 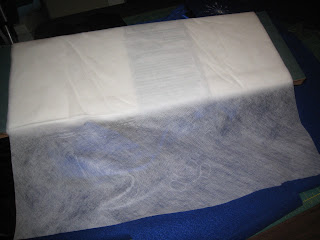 I've now used up an entire bolt of wash-away stabilizer and am on to the second.  I'm trying to decide ahead of time what to buy in November to do a 2014 spending ban as well, so I'll need to decide between one or two bolts of wash-away stabilizer.  The good news is, I'm really finding out what I use during the year.  The bad news is, this is going to be one AMAZING shopping spree in November.  Perhaps I should warn my credit card company in advance?

I'm doing the second design in black and gold now, and it seems the fabric glue doesn't take as well on this one, as I have a slight pucker on the fabric: 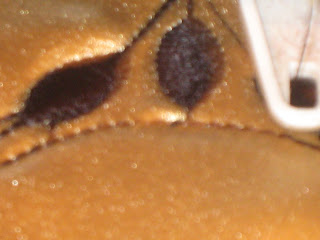 which will actually be almost impossible to see, but I might need to think of some new options here.  Holding it down with my fingers worked for the second piece, 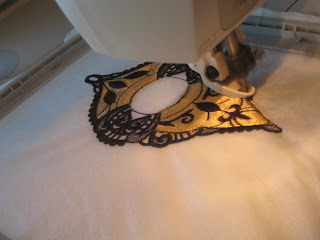 but is probably a bit less than desirable.  On the next one, I'm thinking I might try pins.  Who knew there could be so much variation in wash-away stabilizer?