So I've finished WIP number 8 in the WIP marathon, which would be quite exciting except for the 19 WIPs left. Not that I actually think I'll make it all the way through to 27 without casting on something new. I mean, if I had that sort of willpower I wouldn't have ended up with 27 Works in Progress now would I?

To give myself a little motivation, I've joined a "Knitting for Men" project for September--the idea being I show some traces of project monogamy and actually complete a knitting project for one of the men of our species. Fair enough, one of the WIPs is a sweater for Andy 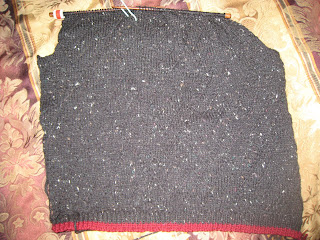 which takes such boring pictures bur is actually much nicer in person. It's "Gridlock" from the fall 2003 issue of Knitter's Magazine, and since they had the sense to do it in red, theirs photographs much better than mine does.

Judging from yarn requirements, I've almost used up 436 yards of the 1535 the pattern calls for, which means I've knit 28% of the sweater. September is now 13% over, so theoretically I would be in good shape--that is, if I hadn't actually started this project sometime last year and have actually been working on it on & off for a couple weeks. (SIDE NOTE: Have I ever actually done the knitting math when things came out looking good??? I didn't think so) So.....it might be a little while before there's any gloating on this website.

I had hoped to have this finished for the first 10-WIP-finisher, Jennifer, 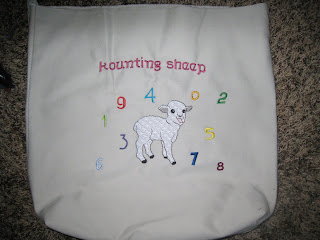